The Labelmakers Group Commissions the First Alprinta 74V in Australia 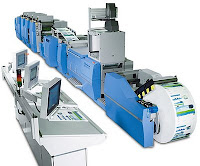 The Labelmakers Group, leading Australian label producers with head office in Somerton in the state of Victoria, invested as first printing house on the fifth continent in an Alprinta 74V web offset printing press.


Managing Director of Labelmakers, Paul O'Sullivan, declined to comment on what exactly the Alprinta 74V would be producing. However he told, “that the new printing press from Muller Martini is very significant for our market.”

Livio Barbagallo, Managing Director of Muller Martini Australia, is pleased with the conclusion of the sale: “This is a fantastic success for us, to sell a press like this in the labeling market. It's important for us to have a great partner such as Labelmakers as reference.” The new Alprinta 74V will be installed next February and ready for production around six weeks later.