Edale, the UK-based manufacturer of narrow web printing and converting presses, are pleased to announce Panflex as their new distributor for Czech Republic and the Slovak Republic.

Panflex started business back in 1991, and today they are at the forefront among innovative suppliers in the package printing industry. 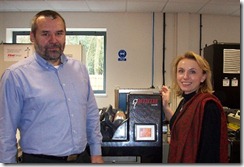 Karolina Raisova, Business Manager, and Jiri Cieslar, CEO, both visited the new Edale Head Office back in March 2010 where they attended a three day distributor training event, to learn more about Edale’s four key market sectors and to get a feel for the brands growth plans moving forward. They were both impressed with the plans to grow Edale’s business and the support given to Edale’s existing agents, and Panflex later signed as Edale’s distributor for Czech Republic and Slovak Republic during Ipex held in May 2010.

Jeremy Westcott, Head of Sales & Marketing, commented “Panflex have a strong reputation in both the Czech Republic and the Slovak Republic and we are delighted to be working with them”.

Panflex will be representing Edale during the FachPack event held in Nuremberg, Germany between 28-30 September 2010, which will offer both existing and potential customers the ideal opportunity to meet with Panflex and learn more about the Edale product range.