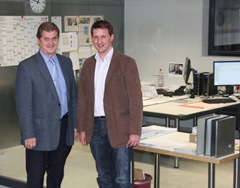 A prepress operator in the spacious CTP department with the two KODAK GENERATION NEWS Systems and the plate processing line.

In addition to its two main titles Straubinger Tagblatt / Landshuter Zeitung, the newspaper and media group—which specializes in a wide range of printed and online products as well as local radio and TV—also publishes a series of local newspapers. Fourteen different editions of these newspapers are printed daily in Berlin format, and boast an overall circulation of 145,000. In addition, the media group publishes several advertising journals that are delivered door to door twice a week. Newspaper CTP for the 21st century The KODAK CTP Systems image plates for a new 64-page newspaper web offset press from KBA, which officially began operation in March 2010. Straubinger Tagblatt / Landshuter Zeitung’s main objectives for the KODAK CTP Systems were to streamline production by automating the platesetting process as much as possible, and spur a significant increase in quality. At the same time, higher plate throughput requirements had to be met, as the newspaper press is now far more productive than before—in contrast to the old web press, it can print continuously in four colors. The two KODAK GENERATION NEWS Systems in the V speed version have optimized the company’s prepress operation, enabling easily handling of this increased volume. Each of the compact newspaper platesetters, which feature the stable KODAK SQUARESPOT Thermal Imaging Technology, can image 200 single plates an hour at 1270 dpi. “The increase in capacity is more than sufficient to see us through our daily peak period from around 10pm until just before midnight," says Wolfgang Heitzer, Production Manager. "After we’ve completed our newspaper production, the platesetters carry on running unattended with products that are not scheduled for printing until the next day.” The GENERATION NEWS Systems are hooked up to the central newspaper production planning system via their internal controller PCs. Two KODAK PRINERGY EVO System RIPs installed upstream of the platesetters convert the digital newspaper pages to output data. A KODAK MERCURY P-HD 850 Plate Processor is connected directly to each of the platesetters, which image KODAK THERMALNEWS GOLD Digital Plates. The processed plates are subsequently fed to automatic punch and bending machines before finally being placed in a plate sorter. From here, they only have to be transported a very short distance to the web press. The high sensitivity of the KODAK THERMALNEWS GOLD Plate makes it ideal for high-speed CTP imaging. And with a nominal run length of more than 200,000 impressions, it is also very robust. Runs of this length are not uncommon at the Straubing print house when it comes to inserts and other promotional print jobs. The maximum volume of the individual newspaper editions is 22,000 copies. Each of the two GENERATION NEWS Systems can hold 1,600 plates, including slip sheets, in its internal magazines—a quantity that keeps the newspaper group going for just over two days. And because of the system-controlled, highly automated production workflow, the labor involved in the platesetting process has been dramatically reduced—it can now be managed by two staff per shift rather than four. Dramatic quality increase Wolfgang Heitzer explains the company’s relatively late migration from computer-to-film to CTP. “For many years we were well served by CTF. However, we've absolutely no regrets about the switch to state-of-the-art CTP because it has led to a huge leap in quality. You don't need to be an expert to recognize how incredibly sharp photographs in the newspaper now appear.” The huge advance in quality and stability afforded by the KODAK CTP System, in combination with the new web press, has prompted Heitzer to push ahead with the changeover from the current 100 lpi to the finer 120 lpi screen, which is better suited for newspapers. Moreover, the media group plans to use FM screens for promotional print jobs as a unique selling proposition for customers. “Problems with variations on the plate are a thing of the past,” concludes Heitzer. “Compared to conventional imaging, where significant variations are the norm, the system as a whole is extremely stable.” KODAK Products are backed by KODAK Service and Support. KODAK Service and Support is made up of more than 3,000 professionals in 120 countries. It is a leading multi-vendor integrated services provider, delivering consulting, installation, maintenance and support services for commercial printing, graphic communications, document imaging, data storage and retail industries. KODAK Service and Support professionals are uniquely qualified to provide services that control costs, maximize productivity, and minimize business risk. 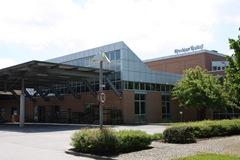 Straubing's daily newspaper has been produced at this print shop on the edge of the pretty Bavarian town since 1991. The new web press, CTP systems, and mailroom equipment housed in the annex began operation in March 2010.