Beer in PET introduced in the Indian beer market

Beer as an oxygen sensitive product challenges the PET bottle and the closure with respect to oxygen transmission.


Especially  for  the  beer  market,  BERICAP  has  developed  a  closure  in ‘crown cork design’, the DoubleSealTMSuperShorty®Crown O2 Scavenger closure, which looks very similar to the traditional beer crown cork and it was the first 28mm closure fitting to the PCO 1881 neck. To secure the high quality of beer in PET bottles during the shelf life, BERICAP equipped the closure with an oxygen scavenger absorbing the oxygen in the headspace of the beer bottle. 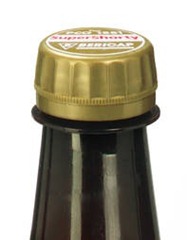 
Outside  Europe  it  was  China  starting  in  2009  with  beer  in  PET  bottles  using BERICAP DoubleSealTMSuperShorty® Crown O2 Scavenger.
Since longer time PET Packaging for beer in India was discussed. Recently a beer brewer introduced in India the 1 ltr package PET Bottles for his beer and decided to use the BERICAP DoubleSealTMSuperShorty® Crown O2 Scavenger - a special beer closure that recurs the high quality of beer in PET even in hot climates such as it is in India.