Excessive total area coverage (TAC) for deep blacks could be costing the global print industry hundreds of million of Euros, according to the results of a study by the Flemish Innovation Centre for Graphic Communication (VIGC). The long-held belief in the industry is that the TAC should be between 320% and 360%, but the VIGC investigation revealed that 260%, or even 220%, is more than adequate, as long as the conversion is carried out with the correct profiles.

Eddy Hagen, director of the VIGC, comments on the study: "We wanted to find out how low you can go in terms of maximum ink coverage before you see an unacceptable difference. The final result was amazing. The old truth – that you need between 320% and 360% TAC – is not borne out, provided you convert colours correctly."

According to Hagen, the possible savings are huge: "The cost of ink represents around 2% to 5% of the cost of the printed material. So imagine that if on the basis of this investigation a company can reduce its ink consumption by 10%, we’re talking about saving more than 6 million to 15 million Euros here in Belgium alone. And when you apply this on a global level, the figures are even more impressive. The turnover of the print industry worldwide is estimated at more than 400 billion Euros, so if you apply the lower TAC principle on this level, the savings equates to more than a billion Euros. Plus being more economical with basic materials in this way would contribute to more sustainable production and would be better for the environment."

Several VIGC consultants with expertise in different areas worked on the project. Fons Put, senior innovation consultant, states: "We have aided a lot of printing companies to reach the ISO 12647-standard these past years. For some time we have included a specially developed test patch in the press trials to look for the optimum black. The experience that we have accrued in all these tests has led to a good idea of what the ‘magic combination’ is."

Erik Arras, also a senior innovation consultant, adds: "But that is only the first stage. We carried out a whole series of tests in combining and refining our ICC profiles with a reduced TAC. Every new combination is tested in keeping with the critical pictures from the VIGC50 XCS, firstly on the screen and then as a print proof. In this way, we finally arrived at our optimised ICC profiles. We also compared the conversions of test pictures using the VIGC profiles with the known profiles of Adobe and ECI, for example, and the tests were definitely positive for the VIGC profiles."

Lower TAC holds its own in the field

The VIGC eventually moved on to a print test to investigate if what was visible on the screen or on the proof, would be confirmed when being printed. The results were presented to several printers and the findings were amazing: nobody saw any significant difference between the pictures with 320% and 260% ink coverage. A packaging printer that regularly prints packaging for chocolate and sweets even found the 220% version to be the best.

Versions of the test pictures that had been converted with the known Adobe and ECI profiles were also included in the print test, but no real difference was visible there either, as far as the optimum black was concerned.

Dozens of print professionals conducted the VIGC test at their booth at the Print/EasyFairs trade fair in Brussels. Four versions of one of the test pictures were shown. Although most of the specialists detected a minor difference, none found that any one of the versions was qualitatively poor due to lower ink coverage. Even the version with only 220% ink coverage was qualitatively acceptable as far as all the specialists were concerned. One of those present at the trade fair commented: "If you gave this job to four different printers you would end up seeing bigger differences than between your four versions.” 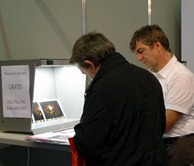 Hagen concludes: "The test we carried out at Print is the final part of our investigation. We’ve submitted the results to a group of specialists, and everybody was full of praise. Nobody would have rejected the printed material with the lower TAC, while more than half gave an identical or higher evaluation to the pictures with a reduced TAC.

“This confirms that prints with a much lower TAC are not only possible, but also they’re acceptable to print experts. Just imagine the savings that can be realised, and how many problems regarding transferring and processing can be prevented."