The probiotic yogurt brand Actimel has announced that all of its bottles are now being made from sugarcane-based bioplastics. 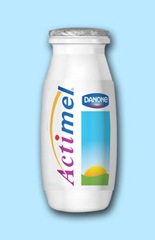 Actimel is owned by French food giants Danone, who earlier this year announced a series of major initiatives to reduce the company's CO2 emissions by 30 per cent. This included the adoption of 'green' plastic across its Activia and Danoninho brands.

Actimel’s new bottles are made from a minimum of 95 per cent bioplastic, using Brazilian sugarcane and produced by plastic manufacturers Braskem. According to Danone, just one hectare of sugarcane can produce enough bioplastic for over 550,000 Actimel bottles.

Marketing Director of Danone Dairies UK, Corinne Chant, said, “We are delighted that customers can now buy our new 95 per cent plant-based bottle. Changing the bottle from oil-based to plant-based is a big step for Danone UK and is part of our wider sustainability journey.”

The remaining 5 per cent of each bottle is made up of non plant-based plastic from Danone's production lines and the white bottle colouring. The bottles are non-biodegradable and 100 per cent recyclable, meaning they can be recycled in exactly the same way as plastic milk bottles.

The company also said that using sugarcane to make their bottles does not lead to deforestation, a wider concern associated with bioplastics. According to the Brazilian National Institute for Space Research (INPE), more than 60 per cent of recent sugarcane expansion took place on pasture land, mostly degraded pastures, in South-Central Brazil.

Making the Actimel bottles used just 0.0002 per cent of the total arable land available in Brazil.