Edale take on a Grim Challenge & announce a new charity for 2012.

Most people may be starting their Christmas shopping on the first weekend of December; but Edale’s Managing Director James Boughton, Head of Sales Jeremy Westcott and Technical Manager Daryl Finter,

have gone to great lengths to avoid this festive tradition by taking part in the Original GRIM Challenge held in Aldershot, Hampshire.

The challenge is an 8 mile off road course using land which is used to test army vehicles where the guys will be running, wading through water-filled ravines and crawling under camouflage nets. 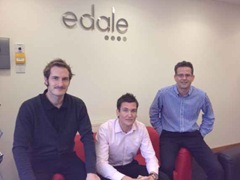 ‘Team Edale’ will be completing the GRIM challenge, not only for their personal achievement but also to get the ball rolling with raising money and awareness for Edale’s chosen charity for 2012; Naomi House Children’s Hospice.

Naomi House is a hospice which provides support to children with conditions that mean they are unlikely to live to become adults. The charity provides care to families and young adults living in communities

across the seven counties of Berkshire, Dorset, Hampshire, Isle of Wight, Surrey, West Sussex and Wiltshire.

Edale have chosen Naomi House as their charity for 2012 and any events or fundraising activities undertaken next year will see donations pledged to this worthwhile charity.

If you wish to sponsor ‘Team Edale’ for this upcoming event then you can do so at www.justgiving.com