French print service provider Maugein Imprimeurs has entered the digital print market after investing in the KODAK NEXPRESS SE2500 Digital Production Color Press. The installation will complement the company’s wide- and small-format offering, and enable it to capitalize on the burgeoning short-run market.

Maugein Imprimeurs began as a newspaper printer before moving into commercial printing. Today the company has a nationwide customer base, comprising large enterprises, public organizations and local businesses.

Maugein Imprimeurs operates two sites, at Tulle and at Malemort, for wide-format and small-format offset printing respectively. The company was an early adopter of in-house prepress equipment and has two CTP systems. It has a turnover of EUR 4.2 million and employs 50 staff.

Moving into the short-run market

Jean-Paul and David Maugein started thinking about moving into digital printing in 2010. “We knew we were missing out on the short-run print market—from a few dozen to a hundred or so copies,” said Jean-Paul Maugein. “We’d been aware of the issue for three or four years. Yet we couldn’t consider investing in digital while the technology couldn’t rival offset.”

In November 2010, the company’s management opted to invest in the KODAK NEXPRESS SE2500 Digital Production Press. “We narrowed down the choice to two digital presses,” said Jean-Paul Maugein. “We chose the NEXPRESS Press because it rivals offset quality and exceeds the inline options and applications. Our decision was also influenced by our past experience of Kodak and the strength of our partnership.”

The NEXPRESS Press is installed at Malemort and controlled by the same PRINERGY Workflow System as the CTP system. “Using the same workflow manager to control the offset channel and the digital channel enables our production to be more flexible,” said Jean-Paul Maugein. “We can easily shift a job from one channel to the other, without the need for re-ripping. The colorimetry is exactly the same, too. It’s a major asset in terms of balancing our workload. Moreover, with over 100 new additions, the award-winning NEXPRESS Platform now prints on more than 700 qualified substrates that range from standard offset substrates to synthetics, magnets, foils, textured stocks, and photo and specialty stocks, which is a real benefit for any printer.”

When Maugein Imprimeurs installed the NEXPRESS Press in 2011 it also invested in a dedicated finishing line. This ensured the NEXPRESS Press was independent of the existing finishing department, which is reserved for wide formats. Meanwhile, the workflow has been upgraded from a PRINERGY EVO to a PRINERGY CONNECT System for increased automation and control of the blended conventional and digital print environment.

“Installation and commissioning went without a hitch,” said Jean-Paul Maugein. “And there were no problems training the operator we recruited specifically for the NEXPRESS Press. The system is easy to use, although the mindset for digital is different from offset. Digital equipment is more fragile, and the initial approach is more complex. But Kodak’s support is second to none. We felt like we were in very safe hands as we ventured into digital. We were fully operational in six months, exactly as Kodak promised.” 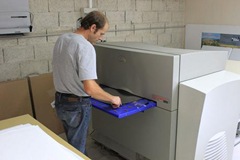 The first customers appeared in March 2011. “We’re the first printers in the region to open a digital section, and news spread quickly,” said Jean-Paul Maugein. “People know about digital and understand its potential.”

Barely nine months after being put into operation, the KODAK NEXPRESS Press is working virtually non-stop. Jean-Paul Maugein is very optimistic. “Digital opens the door to short-run jobs, where we used to have trouble positioning ourselves. We can now meet all the needs of our customers, who are no longer forced to go elsewhere for certain jobs.”

“The system is also enabling us to work with customers operating in areas we haven’t worked in before, such as photographers. We can offer lead times of 24 to 48 hours for digital jobs—some customers even arrive with their order and leave with everything printed.”

Maugein Imprimeurs is planning to invest in black-and-white digital printing, so it can tap into the growing short-run book publishing market.

Kodak is a global advisor and provider of integrated services to help companies transform and optimize their businesses. Through a network of service professionals in 120+ countries, Kodak provides technical, professional, consulting and managed services to enable customers to focus on growing their businesses, maximize productivity, and more effectively manage risks. All KODAK Products and Software are backed by KODAK Service and Support. To learn more, visit www.graphics.kodak.com.