INX International UK Ltd. held a ground breaking ceremony for a new manufacturing facility in Heywood, England on February 27. Expected to be completed in 2013, the 40,000 square foot building at Hareshill Business Park will be 75 percent larger than the current location at Transpennine Trading Estate in Rochdale.

Sakata INX Corp., through U.S. subsidiary INX Group Ltd., began blending and storing ink for the printing of beer and soft drink cans in Rochdale, England in 1992, through a newly established subsidiary, INX Group UK Ltd. INX has expanded and increased its market share to become the leader of supplied ink in the U.S., Asia and Europe. INX International UK Ltd. currently employs 70 people in Rochdale and another 36 overseas. It is anticipated the new facility will result in a workforce increase when it opens.

Attending the ceremony were the Mayor and Mayoress of Rochdale, along with several Councillors.

“The development of this building shows INX International’s commitment to all of our customers but, in particular, to the beer and beverage market in Europe and the Middle East,” said Jonathan Ellaby, VP of International Operations for INX International. “Despite the hard times Europe is going through, INX is committed to the market and to improving our manufacturing capability in the region. We will add equipment that will improve efficiencies and will allow us to increase our output for the European market.”

INX International Ink Co. is the third largest producer of inks in North America with over 20 facilities in the U.S. and Canada, and is a global supplier as part of Sakata INX worldwide operations. For more information, visit the Web site at www.INXinternational.com 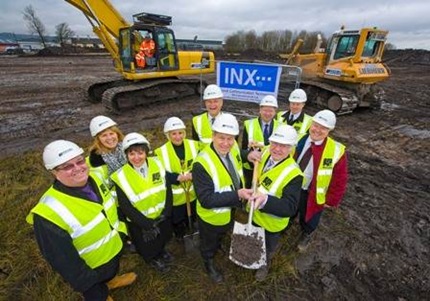