Flex ON relies on Gallus

For some years now, Flex ON, a print shop based in Vestec near Prague, has been playing a key role in producing self-adhesive labels in the Czech Republic. The strength of its market position is supported to a major extent by presses and technologies from Gallus.

The history of Flex ON began in 1994 when the company was founded as a full-service supplier of self-adhesive labels. The print shop broke all production records soon after purchasing its first press in 1995. However, the rapid growth was soon checked by shortages in production capacity, prompting the decision a short time later to build a new, state-of-the-art production facility to meet the needs for future-focused label production. The progressive expansion of its technical equipment has made Flex ON one of the most cutting-edge flexographic print shops in the Czech Republic. 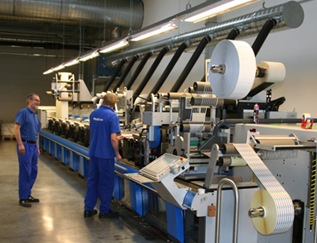 The company's production hall enables customers to choose from various premium quality products, with Gallus presses continuing to be the cornerstone of the company's operations. Flex ON has been benefiting from tried-and-tested Gallus quality since 2008. At that time, the print shop was the very first in the Czech Republic to install the Gallus production flagship – the modular narrow-web Gallus RCS 330 press with eight printing units. Yet this was only the start for Gallus technologies at Flex ON. In 2010, the print shop was expanded with the installation of a Gallus ECS 340 with seven flexographic printing units, followed just one year later by a further Gallus RCS 330. This press has increased the print shop's capacity with its nine additional printing units, ensuring greater productivity for Flex ON and also opening the way for completely new market segments.

"While we're currently seeing other flexographic suppliers switching to digital print technologies, we've opted to develop in a different direction," explains Martin Chaluš, managing director of Flex ON. "Like other companies, we're also always on the lookout for new market segments, although we see considerably more potential in new packaging products than in digital processing." A wider range of applications in label processing and in a number of areas of the packaging industry were the main reasons that convinced Flex ON to buy the second Gallus RCS 330. Although the two Gallus RCS presses are the same model, there are some differences that allow a significant change in the production segment. Both are robust machines that support combinations of UV flexographic printing with rotary screen printing or hot/cold-foil embossing and diecutting. Use of other technologies such as rotogravure is also possible. The new press has nine printing stations that can be used for more specialist technologies, as is the case with the older press, too. A further interesting feature is the fact that the presses can also print on self-adhesive substrates.

"We can process a wide range of products thanks to the press accessories, including in-mould labels, different types of peel-off labels and tube laminates. We hope the new press will enable us first and foremost to achieve greater penetration on the packaging market, where the working width of 330 mm could attract a particular type of order."

Key factors that led to the purchase of the new press included the excellent features of the Gallus RCS 330, the positive experience we had enjoyed to date and Gallus's helpful attitude – from selecting the technology to the final commissioning of the press in Vestec.