KBA strengthens presence in Brazil with own subsidiary

Koenig & Bauer AG has acquired a majority stake in a former sales agency, Deltagraf Representações Comerciais ltda. in São Paulo, in order to strengthen its presence in Brazil.

It thus expands it own global sales network with a subsidiary in the biggest print market in Latin America. The new company, which is to be renamed, will be headed by Deltagraf’s existing managing director Luiz Cesar Dutra, who will be hiring additional personnel. 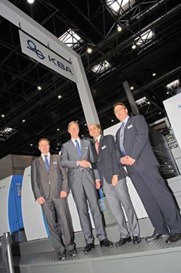 Luiz Cesar Dutra, who has worked in Brazil’s graphic arts industry for some 20 years, took over all sales and service activities for KBA web presses five years ago, and added medium- and large-format Rapida litho presses in March 2009. Following the change of agency the active support of Dutra and his team enabled KBA to boost sales substantially, at first mostly among Brazil’s leading commercial printers. Oceano, which is owned by Grupo Escala, and Editora Abril installed a number of 16- and 48-page Compacta presses alongside some single-width Comet newspaper presses with heatset capabilities.

Deltagraf’s dedication and outstanding customer services are also evident in the rising sales of KBA sheetfed offset presses. In a relatively short period of time the company booked orders for Rapidas from several commercial, book and packaging printers, both ex-KBA and new customers. Deltagraf has landed contracts from some major printers, mostly in the packaging sector. One of them is Emibra, which signed up for two Rapidas. As well as the Rapida 105, Rapida 106 and Rapida 130 -162 models handled by Deltagraf, an increasing number of Brazilian users are opting for B2 (29in) Rapida 75/75E and small-format Genius 52UV press lines. These were previously distributed by another agency, but in future they will be part of KBA’s new Brazilian subsidiary’s product offering.

As the world’s second-biggest press manufacturer and a technological innovator with a broad and highly advanced product range, KBA believes there is still plenty of untapped potential for growth in the rapidly expanding Brazilian market. Its new subsidiary furnishes the resources necessary to offer customers focussed and effective sales and service offerings in this huge country.

Luiz Cesar Dutra and his team are aiming to steadily expand the circle of loyal KBA users in Brazil.