Kodak presented the Print Ambassador Lifetime Achievement Award to Frank Romano in a ceremony at its stand at drupa 2012 today. Romano is the third recipient of the award, which was established as a way to honor those individuals who demonstrate a passion for advocacy and education in the printing industry. 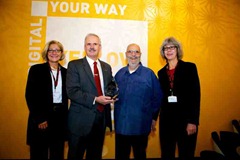 Active in the print industry for more than 50 years, Romano has worked for industry suppliers, written dozens of books and articles, served as a professor in the field, addressed professional groups around the world, and consulted with most of the major suppliers in the industry.

In presenting the award, Kodak’s Chief Executive Officer Antonio M. Perez noted, “Frank has played a key role in helping us all understand the dramatic shifts in technology that have occurred over the last few decades. He has a unique gift for helping us see how the past is influencing the future, and why that future is so exciting.”

Romano is recognized as a leading authority on graphic arts technology and trends, and in 1977 foundedTypeWorld (later Electronic Publishing), one of the industry’s leading trade publications throughout the desktop and digital printing revolution. He went on to launch other magazines, wrote the first report on on-demand digital printing in 1980, and ran the first conference on the subject in 1985.

He has been quoted in the The New York Times, The Wall Street Journal, The Times of London, USA Today,Business Week, Forbes, and many other newspapers and publications, as well as on TV and radio. As Professor Emeritus, he continues to teach courses at RIT and other universities and works with students on unique research projects.

“The term ‘Print Ambassador’ certainly fits when talking about Frank, and reflects his personal and professional commitment to advancing the medium of print,” concluded Perez.

For more information about Kodak at drupa, visit www.kodak.com/go/drupa.