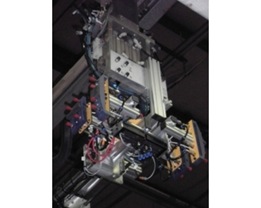 Brian Graham is a patient man. The president and founder of in mold labelling (IML) automation integrator idesign IML (www.idesigniml.com) has advocated the advantages of IML for almost 20 years to a North American molding industry that remains slow in adopting the technology. Yet his confidence in IML’s potential remains high, not least because to date the Lodi, Ohio-based company has sold systems to such big name brands as GM, Tupperware, Cardinal Health and Radio Flyer.

Along the way, Brian and his team — which is, he believes, “the most knowledgeable IML team in North America — have also notched up a series of IML ‘firsts’, including the first stack IML tool, the first wraparound IML label (22” long and for an ice cream container), and the largest cavitation mold (16 cavities). In 2006 idesign IML also won a US patent for its ‘Label Ledge’ technique for preventing labels being dislodged or damaged by melt flow. After initially manufacturing their own robotics, the company changed strategy and became an integrator, and today 95% of its business utilizes existing robotics and, in many cases, tooling to create automated IML solutions.

IML offers impressive advantages. It combines labelling and molding in a single operation, eliminating secondary operations such as printing and applying adhesive labels, speeding production and reducing cost. After the label — of similar material to the finished product — is applied to the mold tool, molten plastic is injected behind the label and bonds to it, creating a finished product incorporating an integral label and needing no further decoration. In addition, a label that is physically integral to the product is both aesthetically-pleasing and permanent, making IML ideal for communicating regulatory information, UPC codes, and so on.

Despite these benefits, and the fact that the technology has been around for some 30 years, IML’s penetration of the North American injection-molded market remains below 10% — in stark contrast to its 90%-plus share of the European packaging market. One reason may be a perception that high-volume applications of IML are challenging in terms of mold design and automation. Europe’s shorter production runs — due to smaller national markets — are suited to 2 x 4 or 2 x 8 stack molds, while high-volume North American production involves higher-cavitation 2 x 16 molds, which involve accurate label placement of 32 labels rather than 8 or 16. Another reason, Brian Graham believes, is the perception that IML’s advantages involve a trade-off with productivity because it takes time to insert the labels and remove parts from the mold.

The good news for Brian and other IML evangelists is that such objections are steadily being overcome as the technology develops. Today’s automated systems are faster and feature highly accurate and consistent label placement, while advances in end-of-arm tooling (EOAT) have hugely increased their flexibility and productivity. Says Brian: “More and more molders are recognizing the opportunity IML offers, not only to improve production logistics but to help separate their decorating abilities from that of their competitors.”

A further reason for his optimism is the growing sophistication of the North American market, as knowledge of IML spreads through an expanding infrastructure of molders, integrators and label suppliers. Some of the credit for this must go to idesign IML itself, which has played its part in spreading the IML message since Brian founded the company in 1999. He first encountered IML as a project engineer at a previous employer in the early 1990s, at a time when the North American market barely existed. He recalls: “All of the equipment was imported from Europe, and we struggled with support. We soon realized we were pretty much on our own, and started developing our own supply chain within the US.”

In the process he came across Meech USA, the US subsidiary of Meech International, the specialist developer and manufacturer of electrostatic controls and related solutions. Brian recalls that at first it was a relationship of convenience as much as anything — “Based in Norton, Ohio, Meech was within 20 miles of us” — but over the years Meech has become a vital supporting partner for idesign IML, so much so that Brian believes that “in many ways we grew the IML market in the US together.”

From the start, he says, Meech brought more than just excellent technology to the partnership. “We’ve worked with other suppliers, both US-based and from overseas, so we have a good idea of what they had to offer. Meech has not only always had the right products at the right price-points, they also demonstrate a better understanding of the market. Additionally, their in-depth knowledge of the larger European IML market has been an advantage, because developments there have transitioned well to North America.” The relationship continued when Brian went on his own with idesign IML in 1999, and to date the duo have installed IML solutions in the US, Canada and Mexico.

Meech provides idesign IML with the static control technology that is crucial to precise label positioning. An important technical issue with IML is how best to place the label inside the mold tool and fix it firmly. Early manual systems were succeeded by robotic solutions using vacuum technology, but this approach necessitated extensive — and expensive — modification of mold tools. The vacuum ports also caused dimpling and uneven cooling. Systems such as Meech’s latest Hydra use static electricity to ‘pin’ the label, a solution that avoids complicated design issues and provides an excellent temporary bond during the molding process. The label material is picked up by the EOAT and inserted into the mold before being pinned directly to the surface of the mold surface. The arm then retracts, the mold closes and the plastic is injected. Unlike vacuum systems, static pinning needs no modification of the mold tool and can be retrofitted to existing molding machines. It also enables different-shaped labels to be applied in the same mold, and in different positions.

Looking to the future, Brian has good reasons to believe that IML will continue to gain market share in North America. He believes one driver will be IML’s ability to label smaller units. At first IML was quickly adopted for relatively large, expensive moldings — applying identification logos to crates for returnable bottles was a typical early example. Today, IML is used on small-diameter items such as yoghurt tubs and drinks containers. For example, Meech’s Hydra miniaturized pinning system, designed for use with small, multi-impression molds, has a mounting footprint of only 50 x 86 mm and the pinning heads are just 15 mm long x 5 mm diameter. To encourage OEM take-up, Hydra features include simple connection and disconnection during mold tool changes, and the option for OEMs to reduce costs by manufacturing their own label carriers.

“We always recommend Meech to our customers,” says Brian, adding that having a totally reliable partner is important in a business where every application is different. “I know that when I get an order I can give Meech a ‘heads-up’ on what I need and when I expect to ship, and receive the equipment within one week before installation. There’s no need for testing, and no hassle — and in all the years we’ve worked together I’ve never had a single failure. That’s some record!”