WiMotion: another world novelty from POLAR

With its new WiMotion knocking block POLAR shows once again how to optimize the work at the high-speed cutter.
WiMotion is a blend of the words wireless and motion. This special, interlinked knocking block allows positioning the backgauge in a perfectly ergonomic way. 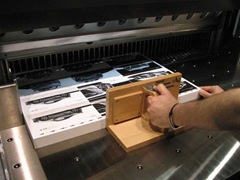 The WiMotion allows the operator to fully concentrate on positioning the material direct at the cutting line, rather than look for the right buttons to press. One of the keys allows switching the speed of the backgauge movement over from slow to fast, and vice versa. This is proving once again the practical relevance of POLAR products.
The patent pending WiMotion knocking block can be employed exclusively on the POLAR N PRO high-speed cutters first shown at this drupa. These machines can also be retrofitted later.