A & E Supplies, Denton, England are manufacturers of plain and printed labels.  Having used a Daco DSI plain label converter since 2007 they needed to increase efficiency of their plain label division further.

With increased pressure on margins from the increase in cost of paper and the downward trend in end user pricing A & E needed to become more efficient.

Having spoken with Daco, on several occasions about the purchase of a further rotary die cutter with a wider web width to improve throughput, the opportunity for a Daco Combi turret rewinder with a quick delivery time became available. 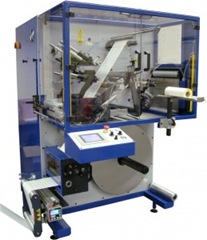 Having looked at turret rewinders in the past we felt that they did not suit the type of work that we produce.  We produce large rolls on our Edale Beta flexographic label press and need to finish them efficiently offline; we currently rewind them on an inspection slitter rewinder.  Daco explained that the Daco Combi is unique as the turret rewinder has its own built in unwind and slitting.  The Combi can be placed on the end of a flexographic label press or run offline enabling us to choose which is the most efficient and cost effective for the job.  Previously we would have had to choose an inline or offline turret and would have not had the flexibility, inline turrets often slow down the press when running small mandrels but with the Combi we have the option of running either inline or offline commented Andrew Hurford, Managing Director of A& E Supplies.

This made us look again at turret rewinding and the Daco Combi’s unique features fitted in with the type of work and processes we have.  For the small roll production for the 5” diameter rolls for thermal transfer printers we can put it on the end of our DSI blank label converter reducing significantly the downtime created when attaching the web to new cores at each cycle end as this is now fully automatic and the finishing on the end of the Edale Beta or finishing offline reduces time spent on the inspection rewinder.