Following the recent installation of a 510mm wide servo-driven Edale Sigma at Afripack Labels based in Pinetown, South Africa; Edale, the UK manufacturer of flexographic printing presses and converting equipment, have confirmed the sale of a 430mm web width fully servo-driven flexo press to a second South African company in the form of an Edale Gamma.

The purchasing company, Morvest Mithratech (Pty) Ltd based in Johannesberg, invested over £1m for the high specification Edale Gamma to further expand their production capacity.

The Edale Gamma flexo press incorporates the latest in UV flexo technology and makes extensive use of independent servo drives for accuracy and flexibility. It is capable of printing on a variety of substrates from 12 micron unsupported film up to 600 micron carton board – at speeds up to 200m/min. 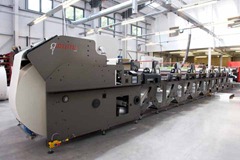 A similar machine to the one sold to Morvest Mithratech

Morvest Mithratech, a subsidiary of Morvest Business Group Ltd with a staff complement of over 2,000 and an international footprint in Africa, India and the USA, saw a rise in demand for their product offerings and contacted Edale’s South African representative, Ferrostaal Pty, after which the deal was concluded after further meetings with Edale at Drupa, and visiting one of Edale’s existing Gamma customers in the UK.

“We are very excited about this strategic purchase as it not only brings the latest technology to the Mithratech production operations both for scratch cards as well as for general printing, but also true value and a competitive advantage to our business. This investment forms part of the Group’s strategy and further cements Mithratech’s foothold as the market leader in Africa, by allowing us to offer the best value, quality and most competitive pricing structures”, said Morvest Mithratech’s Managing Executive, Faheem Varachia.

Floors Coetzee, Product Manager of Edale’s South African representatives, Ferrostaal Pty comments “We have seen an increased interest in Edale products within South Africa and were delighted to achieve the Afripack sale, but to then follow this up with the Gamma line was incredible and we look forward to seeing more installations throughout South Africa soon”.