Esko  announces that its workflow for large format printing, Esko i-cut Suite, has been named a recipient of a 2012 Printing Industries of America InterTech™ Technology Award. Since 1978 the InterTech™ Technology Awards sponsored by Printing Industries of America have honored the development of technologies predicted to have a major impact on the graphic arts and related industries. More than 80% of technologies that receive an award experience continued commercial success in the marketplace.

“Esko received, once again, wonderful news from the Printing Industries of America. We are flattered thati-cut Suite was deemed worthy of this prestigious award. We believe our track record of awards accentuates our continuous innovation, supported by our significant R&D investments,” comments Carsten Knudsen, Esko President and CEO. “Yet, we are even more honored that i-cut Suite is being adopted by many large format printers who are finding exceptional productivity and quality gains. Untili-cut Suite, wide format printers either tried to piece together prepress components – or did very little at all. i-cut Suite was the first workflow built specifically for wide format shops; not commercial print operations whose jobs are very different.” 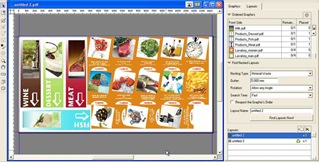 “The judges acknowledged that wide format workflows have been, for the most part, missing. Every large format digital printer has different RIPs and capabilities. i-cut Suite provides a unified workflow,” comments Mark Bohan, Vice President, Technology and Research, Printing Industries of America. “In particular, i-cut Suite provides an innovative solution linking the print to the finishing equipment. The judges also were impressed with i-cut’s ability to automate the process, especially important since large format can be a very labor-intensive form of printing.”

Esko i-cut Suite: a workflow that oversees large format, from design to print to cut

Often, slight distortions between printed graphics and contour cuts may cause unacceptable results. The i-cut Vision Pro control system – found on a range of finishing systems – offers accurate die-less cutting. It uses a camera to register the size and position of the printed materials. Then, cutting shapes are adapted to the shape of the graphics.

i-cut Automate ties the pieces of the i-cut Suite together, automating the entire prepress production with a conditional workflow system. Operators can easily monitor the workflow, intervening when necessary.i-cut Automate can also be integrated with MIS, enabling automatic job creation and the submission of job parameters to the workflow via XML data.

Leicester based Data Image Group Ltd. in England was an early user of i-cut Suite. “Our company has grown 100%, but we have not increased our headcount in the art department. This all comes down to the power of the workflow. We use i-cut Suite on every job and could not live without it. Before, we created most of our cut lines and ganged artwork on sheets manually. The problem with most art files is that you need a shape surrounding the art. Unfortunately, most client files come with crop marks only, which are useless for our cutting tables. We had to reopen the PDF file in Adobe® Illustrator® to create the box,” explains Robert Farfort, Director at Data Image Group. “i-cut Layout lets us detect trim boxes, create the cut file, and send it to the cutting table. It has reduced the potential error of damaging a file.”

“Creating cut lines and ganging artwork for print could spend nearly a day for just one job. Now, it takes us only 4-5 minutes. It has hugely transformed what we do with artwork,” adds Farfort. “We have also seen a significant 10-20% savings in materials utilization, depending upon the complexity on job. We also found savings in print time. Printing a sheet on a digital inkjet printer, depending on the device, can take 15 minutes to 1⁄2 hour. By reducing the number of sheets we print on a job – for example from 13 to 10 sheets – we save 30 to 40 minutes of production time. Of course, that allows us to print more jobs and to drive more profits.”

Ad-vantage Signs and Graphics, based in Burlington, Canada, has noticed similar results. “We’ve only used i-cut Suite for several weeks, but already are experiencing much faster production. Our graphic designer said in some instances it is 75% faster than our previous way of handling PDF files and imposition,” notes Jeff Beaton, Vice President of Ad-vantage Signs and Graphics.

If Ad-Vantage was running multiples for foam core, the file sizes got so large just for editing that it took hours just to download them. i-cut Layout offers different resolutions. “With Illustrator® we were transferring 1.5GB file sizes, and were losing a lot of time just waiting. With i-cut Suite, it’s 10 MBs. We get a screen preview, so we aren’t waiting for the files to keep reloading,” says Bradley Cousins, Ad-Vantage graphic designer.

“Just this week we received a job requiring us to print 30,000 2’x5’ decals with a lot of different artwork. If we didn’t have i-cut Layout to import the files and create the layout, it would have taken days to do it. Especially having to figure out the math of how many could fit on a sheet – all that is done automatically in i-cut Layout,” remarks Beaton.

“As print buyers have become more cost-efficient and reactive to marketplace changes, run sizes have become smaller, there is more versioning, and more pressure on quick turnaround times,” concludes Steve Bennett, Esko Vice President, Digital Finishing Business. “Before, the wait time from digital wide format printers would likely cause production backlogs, but printer speeds have caught up. Often, the production logjam is now on the pre-production workflow. In order to stay profitable, it is important to keep the digital presses running. With i-cut Suite, Esko offers ways to combat these delays, offering tremendous opportunities for productivity advantages to exceed demand. We feel confident that i-cut Suite will hold up to the expectations of an InterTech Award recipient.”

About Printing Industries of America (www.printing.org)

Printing Industries of America is the world’s largest graphic arts trade association, representing an industry with more than one million employees. It serves the interests of more than 10,000 member companies. Together with its nationwide affiliate network, Printing Industries delivers products and services that enhance the growth, efficiency, and profitability of its members and the graphic communications industry through advocacy, education, research, and technical information.

Enfocus, with its suite of PDF tools for graphic designers and print production professionals, is part of Esko.

Esko employs around 1200 people worldwide. Its direct sales and service organization covers Europe, the Americas and the Asia Pacific region, completed by a network of distribution partners in more than 50 countries.

Esko is headquartered in Gent, Belgium, and has R&D and manufacturing facilities in five European countries, the United States, China and India.