Golden Era Group (www.golden-era.co.za), the second largest printing and packaging company in Southern Africa, is the latest operation to achieve Esko‘s HD Flexo Certification (www.esko.com/HDFlexo). The accreditation was presented to Managing Director RajChhita at the Flexographic Technical Association of SA luncheon on September 14.

“Flexographic printing has improved greatly over the last few years and the quality and productivity we can now achieve is comparable to gravure and litho,” explains Mr. Chhita. “Next to work from Southern Africa we are also winning business from companies in the UK and USA and we expect that to continue to grow as people realize the quality we can achieve. HD Flexo Certification highlights the consistency possible to help us confidently win new work.”

Golden Era is a company that, since it was founded in 1954 as New Era Paper Bags specializing in what was then called "Soweto Bags", has continually reviewed its operations. Golden Era Printers and Stationers was formed a year later manufacturing folding cartons, followed by New Era Plastics, New Era Packaging, New Era Labels and Waxpak for vacuum-formed and thermo-formed containers. Between 1988 and 1994, New Era Plastics was re-structured creating a partnership with Colgate-Palmolive. Acquisitions over the years have included Mondipak Alrode, Mondipak Phoenix, Futura, Press Art and EH Walton. 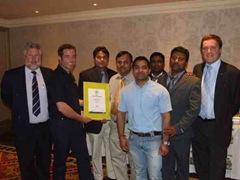 Achieving HD Flexo Certification is an extension to this and has enabled Golden Era to improve its service while at the same time differentiating it from the competition. “Flexo is a more cost effective method of production. In the last few years the quality has increased as has the variety of substrates that can be printed. We are always looking at ways to enhance our service and HD Flexo has enabled us to do that.”

Mr. Chhita has a strong relationship with Esko distributor Antalis and Roshicka Govinder, marketing coordinator comments: “Golden Era joins a select group of professionals both in South Africa andworldwide who have been awarded HD certification - an outstanding achievement and recognition of the exceptional quality standards which they can obtain.”