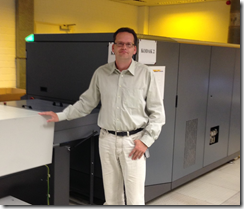 Thermal plate imaging was introduced at the MZ Druckereigesellschaft mbH print works in the German town of Halle an der Saale approximately two-and-a-half years ago, in the form of two KODAK GENERATION NEWS Platesetters. Over the last few months, the newspaper printing division of Mitteldeutsche Druck- und Verlagshaus GmbH & Co. KG, a company belonging to the Cologne-based media group M. DuMont Schauberg, has been building up experience in working with the new KODAK THERMALNEWS PT Digital Plate.

Following the digital imaging process, this printing plate, which has been designed to respond to the needs of modern newspaper offset printing, can be used without the need for any preheating or prewashing (removal of the overcoat). This allows users to reduce both water and energy consumption during print form production. For Dirk Borrmann, print operations manager responsible for coordinating production, this is one of the outstanding features of the new KODAK Plate. The efficiency of print form production using the THERMALNEWS PT Plate is further boosted by the plate’s very high imaging speed which means that the energy requirement is a mere 70 mJ/cm2. Each of the two X-speed versions of the GENERATION NEWS Platesetters achieves throughput of up to 250 individual THERMALNEWS PT Plates per hour in the 341 x 516 mm format used by the company.

“The fact that the new THERMALNEWS PT Plate allows us to avoid the need for preheating and prewashing simplifies the process for us. At the same time, we can cut our costs and reduce the environmental impact of plate production due to the reduced consumption of energy and water,” explains Dirk Borrmann.

The main publication produced by MZ Druckereigesellschaft is the Mitteldeutsche Zeitung, a newspaper that appears in 17 local editions with a total circulation of around 215,000 copies. In addition, the company prints a large number of freesheets which, together, takes its weekly output to 1.1 million printed pages. The production spectrum is rounded off by various outside contracts, including a number of weekly and monthly newspapers. The average daily plate requirement for the company’s three newspaper presses amounts to 1,200 units. Sometimes, however, the prepress department needs to supply the printshop with as many as 2,000 print-ready plates per day.

The new plate with negative imaging has replaced the KODAK THERMALNEWS GOLD Plate at MZ Druckereigesellschaft. Dirk Borrmann makes it clear that the changeover has not caused any problems in the prepress department. The only adjustment required was in the output parameters of the KODAK GENERATION NEWS Systems.

And the only difference for the print workers at the presses resulting from the introduction of the THERMALNEWS PT Plate was the slightly different greenish-blue colour of the coating. As users of the other items in this Kodak Product family have come to expect, the new plate also offers an outstanding ink-water balance.

The consistency of the THERMALNEWS PT Plate in production of runs of 200,000 prints without preheating is more than enough for the print shop’s normal job structure. “If we occasionally have to deal with larger runs for specific contract jobs, then we can always reactivate preheating and achieve up to 350,000 impressions,” explains Dirk Borrmann. “And now, after using more than 140,000 THERMALNEWS PT plates, we can say that Kodak has launched a product that represents a genuine advance over competing offers, in particular due to the elimination of the need for preheating and prewashing.”