Edale are pleased to announce the sale of a four colour 510mm fully servo driven Gamma flexo printing press to a longstanding customer, Halwani Brothers, based in Jeddah, Middle East.

Halwani Brothers are one of the best-known food manufacturers in the Middle East, achieving large growth year on year; not only with food production but also the quality of the packaging. Due to their focus on packaging, more sophisticated equipment was needed to aid with the production, so when the company moved into their new factory in 2011 the company took the decision to purchase an Edale Gamma after having an older Edale model; an E430 press which they had purchased many years ago, which was still running production 24 hours a day, seven days a week!

Mr Bhardawil, Production Director, says “We found our existing Edale E430 machine to be a very reliable runner but as our production needs became more sophisticated we decided to invest in a more sophisticated press to meet demands and with that came our decision to purchase the Edale Gamma. There was never any doubt that we would pick anything else when we visited the UK and saw a Gamma running in its production environment and were very impressed by the capabilities”.

During installation, the Edale engineer dismantled the E430 machine and then reassembled it again in the new factory where they now stand side by side, representing the Edale of old and the new 21st century Edale! 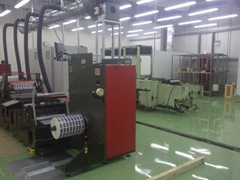 The new Edale Gamma sits alongside the older Edale E430 machine in the factory at Halwani Brothers.