Erhardt+Leimer is seeking to grow further 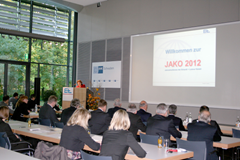 „E+L 200“ is the title of the latest ambitious project tackled by the automation specialist Erhardt+Leimer with its headquarters in Stadtbergen, Germany. It is the company’s target to increase its worldwide sales from currently about 120 Mio. Euro to 200 Mio. Euro until the year 2022. The project was introduced during the company’s Annual Conference which took place recently. For the 20th time Hannelore Leimer and Dr. Michael Proeller of the Corporate Management had invited employees and representatives of the worldwide group to attend the meeting.

During the first part of the conference focus was laid on the general business performance. Due to the fact that 70 percent of the company’s total sales are achieved outside Germany and 60 percent thereof outside Europe business development in their worldwide subsidiaries is of greatest importance for E+L.

Therefore, the audience followed the lectures given by the representatives from Italy, China, India, Brazil, the USA, Canada, and Mexico with specific interest. At the end everybody was convinced that the E+L group is well prepared for the future, even though challenges vary from one country to the other. Corporate Management was particularly pleased about the company’s success in Asia. The expansion strategy for Asia adopted in 2010 has been fully effective with a significant sales growth in the Asian countries in 2011.

As in the past the second part of the conference was dedicated to the company’s future and the new project “E+L 200” with its goal to increase the company’s global sales to 200 Mio. Euro within the next ten years. In her opening speech Hannelore Leimer was convinced that the growth could be achieved solely abroad, and she also pointed out that this growth was absolutely essential for maintaining the successful E+L business model of “Exporting from Germany - Being competitive abroad”. Especially during the past few years the company sites in Augsburg and Bielefeld, Germany have enjoyed an above-average benefit from the global growth.

At the end of the conference Dr. Proeller, Mr. Rueckel, Head of Finance, and Mr. Schotter, Head of Corporate Production, explained how the goal could be achieved. In their lectures they showed the challenges in the fields of finance, product development, materials management, and with regard to the company’s organization. It became very obvious that the ambitious goal could be reached only if all align with the common strategy and persistently follow the common path for the next ten years. Taking into account the successfully realized expansion strategy for Asia, Erhardt+Leimer should be able to cope with this new challenge as well.