Esko is celebrating two decades of delivering value and partnership through ArtPro, the number one packaging prepress editor for the Mac platform (www.esko.com/ArtPro). “It is hard to believe that ArtPro has been in the market for two full decades,” says Bjorn Willems, Product Manager Interactive Premedia Applications at Esko. “And its capabilities have not stood still over all those years. We have many customers who have been using and benefiting from ArtPro in their packaging workflow since the beginning. ArtPro has grown with their businesses and evolved with market needs, maintaining premier market position in this space. Their wholehearted endorsement of ArtPro speaks for itself.” 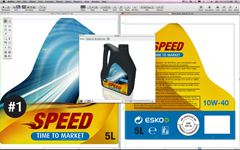 ArtPro is a full-featured packaging preproduction editor offering unique technologies and dedicated tools focused on relieving major prepress pain points. It supports all industry standard file formats and can be integrated into any packaging workflow. When seamlessly integrated with ArtiosCAD and Automation Engine, ArtPro turns Esko’s unmatched packaging software into a complete and unbeatable solution.

Voice of the customer

In honor of ArtPro’s 20th birthday, Esko turned to long-time users for their perspective on how ArtPro has benefited their businesses. “After all,” adds Willems, “without customer acceptance and endorsement, no product would be successful. The comments you see here are just a few of the well-wishes we received from our ArtPro customer base around the world on this historic occasion.” A 20th birthday celebration video including customer statements can also be viewed on Esko's YouTube channel (http://www.youtube.com/watch?v=W3QoF-So2gs).

Ducommun, Switzerland: Jean Ducommun, owner of Ducommun in Switzerland, has used ArtPro since the very beginning. "It's true,” he says. “We've been a happy user since 1992. The software evolved alongside our company. It's so versatile that you cannot only work in separations rather than composite files, but also make changes on the go without having to go back to rip-and-trap. We cannot recommend it highly enough. It's a must-have for any company involved in packaging."

Van Eerd, The Netherlands: "In the 15 years that we've been using ArtPro,” states Jeroen Sneijders of Van Eerd, “ArtPro has grown with us and the tool has allowed us to expand even further. ArtPro capabilities and our Esko partners have encouraged us to keep growing by continuously assessing and improving our processes. We develop packaging for the pharmaceutical industry, so quality and traceability are imperative, and the Certified module has been crucial. The Certified module enables us to perfectly streamline all steps in the artwork process so we can easily and rapidly anticipate and trace back any issues. ArtPro is designed specifically for packaging and labels, which makes it the perfect user-friendly tool for us, enhancing our productivity to the fullest."

Schawk, Los Angeles, USA: Dino Fiocchi, Applications Specialist at Schawk in the US, has been an ArtPro fan from the very beginning. He explains: "The technical properties of the program are outstanding. ArtPro enables you to deal with large images, but still allows you to work quickly. It doesn't slow down with larger images and more complex files. The Stepper, trapping and the editing tools I also consider to be invaluable. The ruler/editing tool far superior to any other editors."

Flexocolor, France: "ArtPro is an excellent solution for producing labels and packaging. It is comprehensive, efficient and scalable. It achieves in record time an unprecedented level of productivity and quality for our flexographic and gravure printing processes," comments David Machado De Lima, R&D Department, Flexocolor.

"Esko will continue to improve the existing packaging tools in ArtPro such as trapping, S&R and preflighting and at the same time respond to new trends in the packaging industry," concludes Bernard Zwaenepoel, Senior VP Software Business at Esko. "In addition, the integration with other Esko solutions will be taking another step forward: structural design files from Studio and ArtiosCAD will be handled better and communication with Automation Engine and WebCenter will be further aligned. Finally, by modernizing the kernel, that will be shared with other Esko applications, ArtPro will become PDF native, platform independent and more productive than ever!"