ROTOCONTROL today announced the sale of an RSC 340 mm web width inspection slitter/rewinder machine to Unipack Industries, a converter in India that provides high-quality self-adhesive paper and plastic labels. The finishing machine was demonstrated in the debut of "Technology Bar" held within the Weldon Celloplast stand during Labelexpo India. 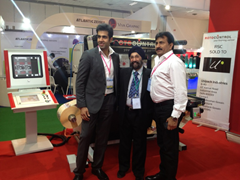 Technology Bar, a new and innovative concept launched by Weldon Celloplast at Labelexpo India, provided visitors a centralized meeting point to view technology demonstrations and engage with over twelve of Weldon's international partners. "The Technology Bar concept was a success," comments Marco Aengenvoort. "Booth traffic to see the ROTOCONTROL machine was continuous and resulted in many leads from repuatable Indian converters. In addition to the launch of their Technology Brochure, the entire Weldon Celloplast team did an outstanding job in promoting the narrow-web industry at Labelexpo India. We commend them for their efforts."

With ROTOCONTROL's acquisition of LeoMat earlier this year, a total of ten ROTOCONTROL/LeoMat finishing machines have been sold into India.