Glass packaging production volumes in Europe grew by 1.9% in the first half 2012 according to data published today by the European Container Glass Federation (FEVE) (1). The growth is in response to the increasing demand on the domestic and outside EU markets. This builds on the positive trend recorded in 2011. Despite the unstable economic and financial crisis that negatively affects the whole European manufacturing sector, these records shed a positive light on the stability and future prosperity of the European container glass sector.

Despite encouraging results, the impact of the long-­‐winded financial crisis on the industry continues to weigh heavily on the competitiveness of the EU industry. Increasing energy prices (3), unilateral CO2 costs, fluctuating and unfavourable exchange rates, and high labour costs hamper the cost competitiveness at global level of the container glass sector. Combined, these challenges delay long-­‐term investment decisions and rather become incentives for delocalisation of production sites and R&D investments outside EU to more industry friendly environments with lower costs.

The EU manufacturing sector, including the container glass industry, continues the main driver of productivity growth in the EU. According to the European Commission (4), Europe accounts for about 30% of global consumption, and the European industry is clearly the most important sector for European international trade accounting for over 90% of overall exports of goods.

We strongly support the policy strategy of the European Commission, focusing on the manufacturing industry as powerhouse of the EU economy – comments Stefan Jaenecke, President of FEVE – The container glass industry is making major efforts to adapt and innovate itself while continuing to meet market demand for a high quality and highly competitive packaging solution. These efforts need however to be supported by a legislative and economic framework that encourages the industry to look beyond short term results and fix long-­‐term and sustainably sound objectives.

(1) Production of container glass for food and beverage, flacons for perfumery, cosmetics and pharmacy. Published on www.feve.org

(2) Including Switzerland and Turkey

(3) See e.g. COM(2012) 582 final communication from the EC to the EP, the council, the EESC and the CoR – A Stronger European Industry for Growth and Economic Recovery “[...] Energy prices for European industry went up by 27% in real terms between 2005 and early 2012, which is higher than in most of other industrialised countries, especially US” http://eur-­‐lex.europa.eu/LexUriServ/LexUriServ.do?uri=COM:2012:0582:FIN:EN:PDF 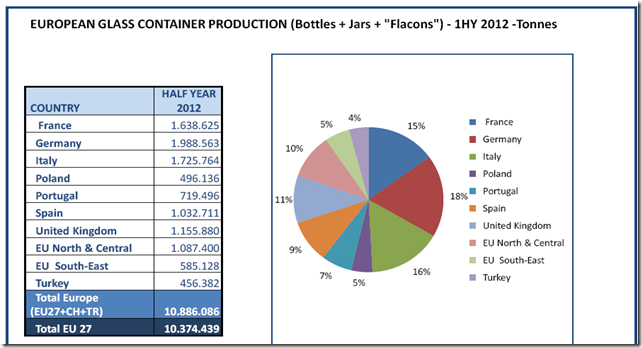 Based on FEVE geographic scope