With prestigious publishing houses such as Gallimard, Hachette, Editis, France Loisirs and Editions Bréal as key clients, the book printing specialist has a strong history of investing in market leading solutions to develop a robust business strategy.

This ability to identify market trends was fundamental to the management team’s decision to upgrade its digital capability to print on the inside pages of books. “The decision came down to two suppliers,” says Gilles Mure-Ravaud. “We opted for Kodak and its PROSPER 1000 Press.” 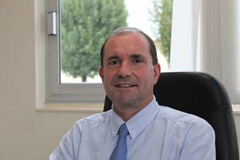 Building on the strengths of digital to gain market share in book printing – this is the strategy of Gilles Mure-Ravaud, CEO of Laballery.

Crucial to the choice was the technical characteristics of the machine. “We were looking for a monochrome digital press offering improved print quality together with higher productivity,” explains Gilles Mure-Ravaud. “We also wanted to improve our short-run capabilities. In addition, the new press also needed to interface with our SigmaLine Finishing System. The KODAK PROSPER 1000 Press fitted the bill.”

It is the second KODAK PROSPER 1000 Press to be installed in France - the first is operating at Sagim, a book printer based in Nanterre in the Paris region – and it was commissioned very quickly. “The operators were trained and the press was up and running in no time, reaching full production in weeks,” says Gilles Mure-Ravaud.

The investment was strongly influenced by another factor – the history of collaboration with the supplier. “We’ve been working with Kodak for more than ten years,” says Gilles Mure-Ravaud. “It all started with CTP in November 2000, when we bought a KODAK LOTEM 800 Platesetter. Our prepress department now has a KODAK MAGNUS 800 QUANTUM Platesetter driven by a KODAK PRINERGY Workflow System and using KODAK THERMAL DIRECT Non Process Plates. We’ve always been 100% satisfied with KODAK Equipment and also with the support we receive from its technical teams.” 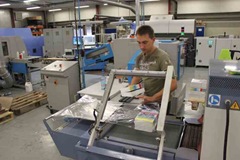 Linked to a complete finishing system including folding, stitching, trimming, assembling and drying, the KODAK PROSPER 1000 Press offers an unmatched level of responsiveness.

And the success is already being measured: “Thanks to the PROSPER Press, we have made a leap forward in terms of print quality,” sums up Gilles Mure-Ravaud. “The sharpness is outstanding, and for digital, the printability is a very pleasant surprise. To achieve the same quality in offset would require a 150 line screen. The productivity did not disappoint either, with a speed of 180 mpm (590 fpm) – twice as fast as our old equipment. And finally, performance in short runs is much improved. We are now competitive in print runs from 100 to 1,500 copies. We are virtually the only printer in the French market able to offer print runs or reprints with such a low start-up threshold.”

It is a hit with customers, and commercial success has been achieved so much so that Laballery has just moved the KODAK PROSPER 1000 Press from two-shift to three-shift production.

“Laballery is the perfect example of how Kodak’s highly commercial solutions can be used to address a range of print production challenges – in this case printing on the inside of book jackets,” states Olivier Claude, Kodak’s General Manager for Print & Vice President Commercial Business EAMER. “Laballery used its expertise to identify a market opportunity and then sought out Kodak’s technological know-how to make it production reality. It then quickly realised how the other benefits of low start up thresholds could add value and improve its competitive offering.”