Founded in 1821 by Girolamo Luxardo, the eponymous company is now one of the oldest European companies, as well as global leader in the production of sweet liqueurs.

Luxardo S.p.A., currently managed by the sixth generation of the founding family, is famous for its Maraschino production and holds the European record for marasca cherry tree farming with approximately 20,000 trees. 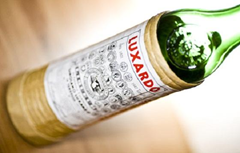 The production of this prestigious company however, is not limited to Maraschino alone, but it also includes a broad variety of sweet liqueurs, herbal liqueurs, grappas and fruit distillates, in addition to the famous Sangue Morlacco, Sambuca dei Cesari and many many more, which are distributed in almost every market worldwide.

In Italy, Luxardo is the top producer of alcohol-soaked aromas for the confectionery sector which include Amarascata, a deluxe Marasca Cherry jam made with 170% fruit.

The production facility boasts one of the most modern distillation plants to guarantee the highest quality standards. The same high standards are required for the product labelling, which is provided by P.E. LABELLERS since 1994. Confirming their trust in our labelling system, in 2012, Luxardo purchased a last generation modular labelling machine, which replaced their previous labelling unit that was also supplied by us and after eighteen years of operation.