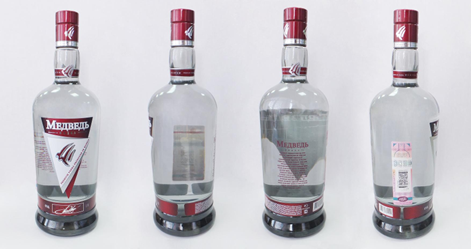 Founded in 2004 in the region of Tula, Medved is a company whose name means "Bear", a popular symbol in Russia which means national pride. This is why Medved is now placed on the market as a reality to imitate, a celebrity. And this is exactly how all types of vodka produced by Medved were conceived and considered. We all know that in Russia, vodka is not only considered a drink, but it's something that reflects the character, dignity and strength of every single subject, through its countless features: dry, soft, ice-cold, fruity, strong or light.

A product so heart-felt and personal can only claim a perfect presentation with its packaging, from the design of the bottle to its final labelling. For these reasons, Medved turned to the experience of P.E. LABELLERS since its founding and reaffirmed its confidence in P.E. LABELLERS labelling systems by buying other three top-range automatic rotary labelling machines in the second half of 2012, with four self-adhesive stations featuring a production speed starting from 7,000 bph; one of these systems was exposed during the latest edition of the UPAKOVKA event in January 2013. A concentration of electronics and precision, a labelling machine that, unlike those offered by most manufacturers, is completely controlled by a centralised computer that manages all settings, from the selection of the label type to be applied, to the format of the bottle to process as well as to the rotation of the plates, without affecting the line speed in any way.

As emphasised by the same owner of Medved the P.E. LABELLERS labelling systems have improved production quality, guaranteeing total flexibility of use as they are capable of operating with any type of material, even those that are not yet commercially available. Furthermore, thanks to the sophisticated optical centring system, the labels are applied with a 99% accuracy, with a tolerance of 1 mm.