JMC Signmakers, based in Zeeland Province, The Netherlands, has taken a giant step forward in its ongoing move toward more profitable automation, according to Esko, a global supplier of integrated solutions for packaging, sign and display finishing, commercial printing and professional publishing. By adding Esko i-Cut Automate to its production platform, the company has entered the third phase of its business transformation, enabling rapid production of personalized signs for a variety of retail and other uses.

Cees Bolijn, one of the owners of JMC Signmakers, explains that the company engineered its transformation in three phases. “The first phase,” he says, “was to optimize the technical aspects of printing and finishing. We acquired an EFI VUTEk superwide format printer and smaller eco-solvent dye-sub and solvent printers. At the end of 2011, we purchased an Esko Kongsberg i-XL44 digital cutting table with the corresponding MultiCUT and PowerHead, which we consider the best milling and cutting table in the marketplace.” 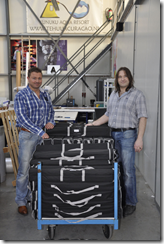 The acquisition of the Kongsberg table enabled JMC to considerably expand its product range, a necessity in a highly competitive marketplace. Bolijn adds, “We are able to process a variety of materials and products, including PVC milled letters, clean-cut paper posters, engraving on crystal-clear polycarbonate, glass and different types of wood, vehicle lettering, corrugated boxes and more.” The Kongsberg’s integrated camera vision recognition system was critical to the accuracy and automation the company was able to achieve in Phase One by measuring the position and dimensions of print before cutting, guaranteeing an exact contour and less waste.

In Phase Two of the company’s transformation, Bolijn and his team focused on streamlining production workflow. He explains, “We process up to 150 orders per week, and operators were spending 30 to 45 minutes per order preparing the files for production.” JMC employs a home-grown order administration system that has enabled orders to be processed much faster and with much less operator intervention.

This led to Phase Three, which was the implementation of Esko i-Cut automation. “This is the final piece of the puzzle—for now,” Bolijn says with a smile. ”Brand owners clearly see the value of versioned and customized signage to address regional, cultural and other differences. But in the past, the production process was quite slow and therefore not cost-effective. Using i-Cut automate and scripting, we have overcome this barrier and are able to produce products with text, photos, logos and other characteristics that are completely variable from piece to piece.” Bolijn cites as an example 1,500 personalized banners created from 70-Mb files with 11 different designs and a unique name and run for each banner. “We now have that job prepared with files nested and ready to print, in less than four hours, where it would have taken us more than a day prior to implementing i-Cut Automate from Esko,” he says.

Not only has JMC Signmakers been able to expand its own business, but its now-unique capabilities have opened the door to providing these services for other signmakers. “We can handle pre-production and deliver complete production files to other signmakers, enabling them to complete orders they would not have been able to produce profitably in the past. We see this as an important emerging aspect of our business and our revenue model,” concludes Bolijn.

· i-cut Preflight, which preflights incoming PDF data, allowing resolution of problems at the beginning of the workflow.