On the occasion of this year's FINAT Label Competition, Schreiner ProTech once more came away with top ranks. The Electric Conductive Films came in first in the special category "Innovation." These delicately die-cut metal films shoulder the tasks of electronics in the product complex; capacitive control panels are one example of the result. During the annual meeting of FINAT on June 13, 2013, in Munich, the World Label Awards were also announced. Two Schreiner ProTech solutions were among the winners: The Pressure Compensation Seals embedded in a nameplate won in the "Innovation" category. The Color Laser Films for the masking of components and housings took the prize in the "Flexo Line" category. 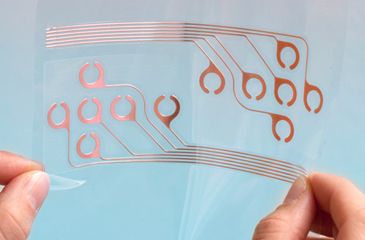 The motto of the FINAT congress was "Label your future." With its Electric Conductive Films, Schreiner ProTech shows what the future could look like. The thin metal films are produced with state-of-the-art die-cutting and printing techniques. They are used as flexibly applicable functional films such as printed conductors for flat surface-mounted designs that are integrated as capacitive buttons into control panels. The FINAT jury specially acknowledged the exceptional technological development with the first place in the "Innovation" category.

In the World Label Awards competition, Schreiner ProTech secured victory in the "Innovation" category. The nameplate with embedded Pressure Compensation Seal merges two separate process steps by integrating marking and venting into one functional part. This saves process time and significantly reduces cost. The most distinctive feature of this innovation is the integration of a Pressure Compensation Seal into a BleedStop Label. The film labels withBleedStop system prevent adhesive bleeding and ensure secure adhesion to rough surfaces, which is especially important for components in difficult production environments.

With equal proportions of innovative spirit and efficiency, the Color Laser Film was the most convincing solution in the "Flexo Line" category. The special film masks components and housings and allows for inscription by laser and flexible cutting at the same time. This offers the possibility of producing different batch sizes of housing panels just-in-time, thus preventing excess inventories of various film variants and delivery bottlenecks.