When Al Mawrid, the printing and converting company based in Sharjah, UAE, decided to invest in a Gallus ICS 670 press to manufacture folding cartons, it bucked a trend that previously had seen the company produce all of this type of work on a bank of Heidelberg sheet fed offset presses. But significantly, it began to expand the company’s printed packaging offering to new market sectors. Nick Coombes visited the Thomsun Group company to find out what lay behind this pioneering decision.

Established in the late 1970s, Al Mawrid is part of an enterprise that employs 1500 people and has an annual sales turnover of $200 million, with interests in shipping, logistics, supermarkets, bakeries, food processing, and construction electrics among other industries. But, it was the Thomsun Group’s involvement with the music trade that laid the foundations for Al Mawrid as a printing operation. The Group has strong associations with music, being the Middle East agent for several musical instrument manufacturers and operating music schools, and some 35 years ago had a burgeoning need for printed audio and video cassette labels and sleeves. What is now Al Mawrid started life as the Thomsun Group’s in-house print facility.

Today, it houses 10 Heidelberg sheet fed presses ranging from single-colour small format up three B1 Speedmasters: a four-colour with coater and a five-colour with coater; a five-colour and a straight eight-colour (convertible to four back four perfector). T K Babukutty, who is General Manager at Al Mawrid, explained the company’s growth: “As an in-plant service facility we grew quite slowly through the early years, relying on Group demand to dictate investment – it’s not the customary way for companies to operate, but it gave us a firm grounding and when business did increase we had the resources of a large organisation to fund new technology.” 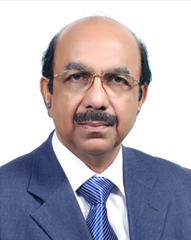 TK Babukutty, General Manager of Al Mawrid, is convinced of the powerful performance of the newly acquired Gallus press.

From a situation five years ago where commercial print represented 75% of the company’s print output, today that figure relates to printed packaging, and essentially folding cartons. Demand grew from the food and cosmetics industries, but also from the local tobacco packers, which supply markets in the MEA region as well as in Asia. “As the demand for cigarette packs increased in volume, we began to find that traditional methods of production on the offset presses and die-cutters became less economic, and decided that if we were to develop our business in this product sector we needed to invest in a new type of technology – more of the same would not work,” he commented.

With most of the top brand names in the cigarette market using roto-gravure technology to print their cartons, Al Mawrid held detailed conversations with these press manufacturers, but concluded that for the type of work its customers were demanding, offset, rather than gravure, would be better suited to the half-tones and graphics used. According to Babukutty, flexo was considered, and discussions were held with Gallus at this stage about possible flexo/gravure combinations, but flexo print quality five years ago was not up to customers’ expectations, and it was only the launch of ‘Hi- Def’ flexo that changed the game plan.

“Once the flexo print quality issue was resolved we knew that inline production was the right way to go for cigarette packs, and after detailed negotiations with Gallus, we agreed to buy the Gallus ICS

670 press that was exhibited at Drupa 2012, as long as it was specified to meet our requirements,” he explained. The Gallus line, which was purpose built for Al Mawrid, stretches more than 50 metres, and is configured with an automated reel unwind, a web cleaner, two units for cold foil or laminate application (or flexo printing), two gravure units, six flexo print stations, flat bed die cutting, a blank separating unit with a shingle delivery. 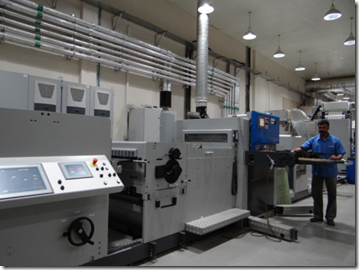 Valued at around the €4.5 million mark, the new Gallus’ top mechanical speed is rated at over 200 metres/minute, and only 10 weeks into commercial production Al Mawrid claim to be operating regularly at around 180 metres minute, on a double day shift, with 24/7 operation scheduled to commence soon. The operators say the speed drops only slightly, to around 150 metres/minute, when cold foiling, and these speeds are being achieved on carton boards of 200 – 250gsm, although Gallus claims the press can handle 600gsm with ease.

According to Mr Babukutty, the Gallus has attracted a volume of new work, in addition to improving production efficiency on existing jobs. It is capable of high quality print, whether running UV or water based flexo inks, and one problem the company has encountered has been the occasional complaint from its customers that the print quality is so much better than before. Apparently, in some markets the Gallus-printed cigarette packs are considered too good and therefore must be counterfeit - perhaps the first example of an improvement being considered a fake! 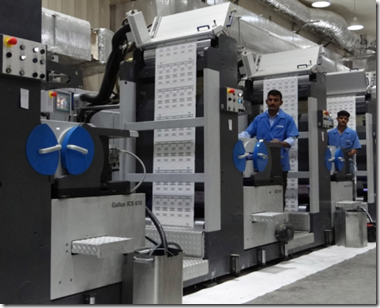 The Gallus line, which was purpose built for Al Mawrid, stretches more than 50 metres.

Securing new work for the Gallus ICS 670 normally entails a degree of print sampling, which, if successful, leads to an order for a limited run of perhaps 500,000 cartons for test marketing, before the go-ahead is given for a print run that can run into many millions. To date, Al Mawrid has seen commercial run lengths vary from 100,000 to 10 million, with a changing trend in the demand for the new ‘Nano’ type cigarettes, which are the same length but have a smaller diameter, and therefore require narrower packs.

The gravure units are engaged mainly for metallics and special colours, and while useful, are used on only 20 - 25% of all jobs. Babukutty explained: “They offer us production flexibility and the capacity to add value, but I do not foresee any significant increase in demand for gravure printing, and we would be unlikely to specify them on any future investment.” The Gallus is used predominantly for tobacco products and cosmetic cartons, where added value is required. Some customers still specify offset printed cartons, and for these the Speedmasters and Bobst die cutters are kept busy, with Al Mawrid using its sheet fed capacity where there is no added value requirement or price is a major issue.

“We carried out extensive market research amongst our customers before we invested in inline flexo technology. Most of them had been sourcing flexo and gravure work from outside the UAE previously, and we wanted to find out to what extent we could influence their buying habits if we offered that facility in Sharjah. Remember, we grew by allowing investment to follow demand, and were not about to make an expensive mistake,” commented Babukutty, whose commitment to making the Gallus press fulfil its promise also involved heavy investment in pre-press, and the recruitment and training of new personnel.

Now, he feels the company has the perfect blend of carton production capability, with a press and a process to suit all requirements and changes in demand. “Ideally,” he said, “we need to run the Gallus 24 hours a day for it to be at its most cost-effective. Make ready and waste on a press of this length support medium to long-runs with embellishment, and our plan is to schedule two or three days continuous running on one job, if possible.”

Future plans revolve around consolidation of the major investment programme undertaken in the months since Drupa 2012. The next machines are likely to be another sheet fed carton press and a die cutter, with the company’s declared aim of moving towards more high-end work and greater differentiation. Drawing on his long experience with the company, especially on the commercial print side, T K Babukutty stated: “Our customers appreciate the fact that we continue to invest in the latest technology because they believe it helps them to solve their problems and grow their business. To us, it’s all about listening, understanding, and lending support, whether it’s meeting a short delivery time, or extending their payment terms.”

There is a good reason why many of Al Mawrid’s customers are still with the company after 25 years. “The modern way of business appears to place little value on relationships. We do here, and our success proves that it works. We value the same level of ongoing support from our suppliers too,” he concluded.