“It has cut our waste by around 30 percent already, and we expect it to generate sales of £1m in its first year,” said Richard Pullan, Managing Director of Kingsway Printers, the label converter based in Grimsby, UK. He was referring to his new Mark Andy P3, one of the manufacturer’s fast-selling Performance Series presses, which was installed only four weeks earlier, and which is adding a new dimension to productivity at the family run business.

Kingsway now has five flexo presses. The new P3 joins three Mark Andy 2200s and an earlier Arsoma EM 280, but the decision to buy it was not a foregone conclusion according to Mr. Pullan, who cites Mark Andy’s decision to move its European headquarters back to the UK from Switzerland as a key factor. “We’ve enjoyed a good relationship with them over the years, and their decision to re-establish a major presence in the UK with a new showroom, demonstration and training facilities, at a time when some of their competitors are reducing their UK operations, was important to us,” he said. 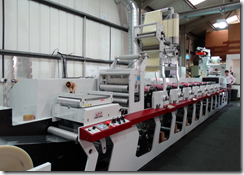 Founded in 1972 by Richard’s parents, Jim and Mary Pullan, Kingsway started life as a jobbing commercial printer and only moved into labels in the early ‘80s when one of its customers asked if it could supply labels on the roll. An initial investment in a three-colour Mark Andy 820 was just the beginning, and the company soon attracted new work from other leading manufacturers, including Brooke Bond Foods. In all, Kingsway came to install six Mark Andy 820/830 three-colour lines, and by the early ‘90s was looking to print four-colour process work by adding an attachment.

“It didn’t work too well and prompted us to look at six-colour inline presses,” said Mr. Pullan, who at that stage was keen to stay with water-based inks and invested in an Arsoma EM 280. “Our business grew, but it was the time when UV-Flexo was hitting the scene, so at great expense we invested in a UV press, which did allow us to move into synthetics,” he added, pointing out that the ‘no-label look’ of Safeway pickles was an early success.

By 2003, sales had outstripped production capacity, and after a visit to Labelexpo Europe in Brussels, Kingsway decided to return to the Mark Andy stable by ordering a 330mm six-colour 2200 line, that was later to have two additional print stations fitted, and a Web Translator for the production of ‘peel and read’ labels. “The 2200 is a great workhorse. It’s been the backbone of many successful label converters over the years, and has proven itself here, with jobs like clear on clear for M&S, who are very discerning,” he said. A key factor in successfully running a business the size of Kingsway is maintaining a sensible margin, because volumes tend to be small. According to Mr. Pullan, the Mark Andy presses allow him to do that, and provide investment capital with which to grow the company.

With run lengths declining, and a need to diversify production capability, Kingsway invested in digital technology in 2010 by adding an HP-Indigo 4500 line to its plant. While extending capacity and offering cost effective production on short run work, Mr. Pullan said: “The P3 now offers us an alternative when previously digital would have been the only option.” Whilst digital has complemented Kingsway’s production facility, he believes UV-Flexo has a strong future and points out that he has added two further flexo presses to his capacity since the HP-Indigo was installed.

In fact, it was the capability of handling short run work cost effectively that attracted him to the Mark Andy Performance Series. Claiming that the P3 offers the perfect crossover from the 2200 to the more sophisticated servo P5 and P7 presses, Pullan says the P3 is having a big effect on productivity. “We estimate it’s five minutes per colour faster to make ready with its easy plate change, and the short web path and fast registration has reduced waste significantly.” With landfill costs increasing year over year waste is a critical factor. Already around 30 percent reduced in its first month of operation, Mr. Pullan says the target for the P3 is 50 percent or better, and is in no doubt that he’ll hit it.

Currently the company prints approximately twice as much on paper substrates as film, a split that according to Pullan has changed little over the years and is a mark of the company’s consistent performance with its customers. Business comes mainly from the food, pharmaceutical and chemical industries, and has been largely responsible for driving investment at Kingsway over the years. “We’re in a position where we have to match or better the quality and service offered by larger competitors, but do not have the leverage to steer the market. But, being smaller allows us to be more responsive, and that’s the foundation of our customer care,” he stated.

All of Kingsway presses run double-day shift, which with overtime generates around £5 million of sales a year. The new P3 will contribute significantly to that figure, but crucially save on power consumption too, and with less heat generated by its UV system, provide an improved working environment for the operator. “I shouldn’t be surprised if the P3 accounts for 35 percent of our flexo sales. I shall be interested to see where laser, inkjet and nano technology takes digital printing in our industry, but for Kingsway, the Mark Andy Performance Series is a big leap forward for flexo,” he concluded.