July 08, 2013
In 2012, demand for self-adhesive label materials in Europe amounted to 5.78 billion square meters, a growth of 1.7% compared to 2011. With a market share of around 45%, self-adhesive consolidated its lead as the dominant labelling technology in Europe, ahead of wet-glue (40%), sleeving (7%), in mould (3%) and other technologies (5%). The linear growth pattern of around 5% year after year that lasted until the middle of the last decade has however disappeared. Evidently the label industry did not escape the impact of the global financial and economic crises. But not only that: with consumption levels reaching maturity in Western Europe, self-adhesive demand has become more sensitive to the volatility of consumer behaviour. But there are two ‘counter forces’: innovations in the filmic label domain and the on-going evolution of Eastern Europe continue to offer significant upward potential.

The long view
2012 was an important benchmark for the European self-adhesive label industry. Last year, total labelstock consumption of 5.78 billion m2 doubled the estimated 2.84 billion published by EPSMA for 1996, the base year of our data set. However, it took the industry about 7 years to reach the halfway mark of this journey, and from 2003 onwards (the fist year of the FINAT Labelstock statistics) it took almost 10 years to add the other half of the overall increase. This clearly illustrates the decelerating growth pace of the industry. 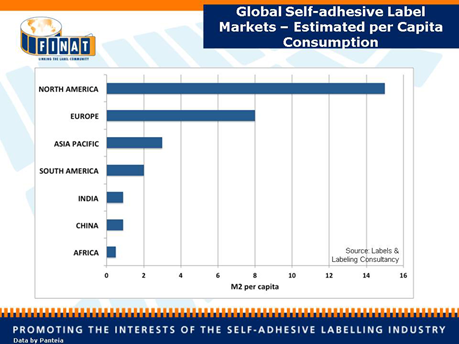 The slowdown in year-by-year growth rates between mid-2005 and mid-2008 was mitigated by the higher (but also descending) growth rates for filmic label materials. From mid-2008 onwards, the industry trend is severely disturbed by the global crises, with a dramatic downturn in 2008-2009 being ‘corrected’ by an excessive upswing in 2009-2010 and the ‘double dip’ in 2010-2011. Signs of modest recovery in the first half of 2012 have been slowed down by signs of a prolonged recession in several European countries as part of government measures to balance budgets and restore confidence in the Euro.
Global perspective
According to data from Labels and Labeling Consultancy, global label demand (all technologies included) amounts to between 40 and 45 billion m2. About 30% of this volume is consumed in Europe.
When the emerging markets are included, globally wet glue labels still hold a majority share of 46%, followed by self-adhesive with 37% and sleeving, wrap-around and in-mould holding shares of 8%, 6% and 2% respectively. This is because in the emerging markets, self-adhesive is still less advanced. As stated in the introduction, the situation is reversed if only the mature western label markets of Europe and North America would be considered. 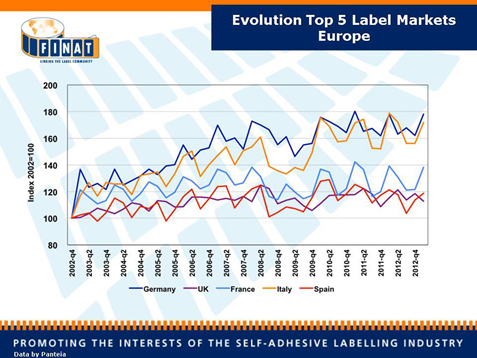 Although average per capita consumption of self-adhesive labels in North America with around 15 m2 is similar to consumption levels in the mature markets of Western Europe, there is huge variety of per capita consumption levels across Europe, ranging from 3-4 square meters in East and Southeast Europe, to around 20 m2 in some countries in Northwest Europe, with an overall average across Europe of 6-8 m2 (see chart 1). This indicates a significant upward potential for the label industry in the wider ‘Eurovision Europe’.
Recent developments in Europe – different perspectives across regions
Against this background it should be no surprise that the perspective of market developments differs significantly at opposite ends of the European periphery. Against the marginal evolution of labelstock demand in the other aggregated regions of Europe (all recording increases or decreases within the plus or minus 1.5% range), Eastern European markets consumed 11.4% more self-adhesive label materials than in the preceding year! Total labelstock demand recorded in the Eastern European countries (12 countries, 325 million inhabitants) amounted to 1.15 billion m2 and the region is now approaching Southern Europe (6 Mediterranean countries including Turkey, 280 million inhabitants) with a demand of 1.28 billion m2 as the second largest self-adhesive labelling region in Europe. Central Europe (6 countries, 125 million inhabitants) is still far out of reach for the rest of Europe with 2.27 billion m2. 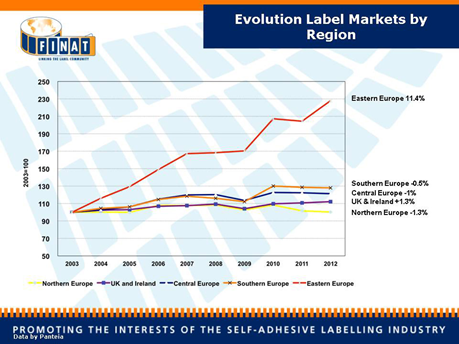 Within the top 5 of self-adhesive label consuming countries in Europe, Germany and the United Kingdom consolidated their leading positions ahead of France, Italy and Spain. However, from a historical perspective, Germany and Italy have (see chart 2) outperformed the other 3 countries. Together, in 2012 these 5 countries accounted for around 60% of total labelstock demand in Europe.
It should be noted however that the underlying market drivers and economic fundamentals may differ substantially across individual countries. Generally speaking, for the smaller countries, volume and evolution of labelstock demand tend to correlate more strongly with FMCG exports, and hence the average consumption of label materials per capita tends to exceed that of the bigger markets.
Paper versus filmic labelstock demand trends
On balance, in 2012 demand for self-adhesive label materials in Europe added volume of almost 100 million m2 to its business in 2011. About 90% of this volume was generated by net increases in roll label materials demand. Of this net growth, a majority of 48 million m2 was achieved by the net increase in demand for filmic roll label materials, ahead of the 41 million m2 net increase in paper rolls demand in 2012.
Interestingly, this overall net increase was entirely attributed to the growing demand from Eastern Europe. In the case of paper based roll label demand, the net increase in demand of almost 80 million m2 in the 12 Eastern European countries offset the net decrease in the other regions by a factor 2. In the case of non-paper roll label materials, demand growth in Eastern Europe represented almost 75% of the net increase in demand across Europe.

Outlook 2013
During the first quarter of 2013, self-adhesive labelstock demand increased by a modest 0.4% compared to the first quarter of 2012. Although this positive result prevented the industry from dropping back into a European ‘label recession’, it continued the downward trend in annualised quarterly growth rates since the third quarter of 2012.
As in 2012, demand for filmic roll label materials (+1.6%) and aggregate demand for self-adhesive label materials in Eastern Europe continued their role as driving force of labelstock demand, a role which they have played for the past 10 years (see chart 3)
Despite the prudent signs of (slow) recovery and significantly improved financial conditions, the countries within the Eurozone continued their recession at the start of the year with their sixth consecutive quarter of output decline. Even Europe’s ‘export engine’ Germany is facing a slowdown. Although important progress has been made in stabilising government finance, government debt in some countries is unsustainably high and suppressing home demand.
In the last quarter of 2012 and into 2013, there appeared to be a positive shift in business sentiments at the label converters’ end.