Novosibirsk-based Print Graphica in Russia is attracting work from further afield and enjoying a significant increase in the quality of its plate production after investing in the KODAK FLEXCEL NX System.

“We have won new business not only in the Siberian and Far Eastern regions, but also in the Urals, Moscow, St Petersburg, Krasnodar, Volgograd, and in Kazakhstan,” comments R. Vasilyev, General Director for PrintGraphica. 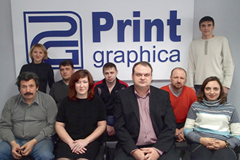 Historically, flexographic printing was confined to Russia’s federal centre but many businesses have now become established regionally in Siberia and Novosibirsk. Founded in 2003, Print Graphica spent its early years competing with local repro houses and the major players in Moscow and St. Petersburg, which were using the latest cutting-edge technologies. The company gleaned a competitive edge by focusing on top-quality plate production and streamlining its processes to ensure cost-efficient production.

With a number of LAMS-based repro houses springing up in Novosibirsk, Print Graphica looked at alternative technologies. After exploring the options available, it reviewed the KODAK FLEXCEL NX System, a digital flexographic plate manufacturing system that includes both an imaging device and media. The management team was impressed by the flat-top dot structure of the plate and the capabilities for increased resolution (up to 300lpi), enhanced image clarity and definition, and expanded colour gamut. They noted that the plate dots are more stable, with a well-formed ‘shoulder’, and due to the fact that all dots on the plate are the same height, they saw greater print stability, consistency and less plate wear.

“When we read the claims about the FLEXCEL NX System—about the quality being comparable to offset printing, photorealistic images on flexible packaging, and lower use of ink—we were a little suspicious,” says Mr Vasilyev. “So we tested the system thoroughly, and we were so surprised by the results that we tested it again, just to make sure! After putting it through its paces, we knew we were on to a revolutionary system that the flexography industry has been waiting a long time for. We were the second repro house in Russia to install the FLEXCEL NX System, and in doing so we’ve ‘skipped over’ LAMS technology.”

When the FLEXCEL NX System went online, it did not take long before the Print Graphica team was winning new business. It can now point to a number of examples of clients’ print jobs that demonstrate the advantages of KODAK FLEXCEL NX System technology.

In the first example, a recurring run of around 1.8 million impressions was printed from LAMS digital plates on a COMEXI Flexographic Printing Press using solvent inks. Two or three sets of plates had to be ordered each time. During the run, the press had to be stopped, plates reattached, and the printing process adjusted before it could continue. With KODAK FLEXCEL NX Plates just one set was needed to print the same run, and the printing speed increased to 350m/min.

The second example is a frequently recurring, short-run job, produced using the same COMEXI Press and solvent inks. The LAMS plates survived no more than five reattachments, while the FLEXCEL NX Plates survived over 15.

The third example involves labels produced using UV ink printing at 240lpi. Superb results were achieved with the FLEXCEL NX Plates, and the printing house won a profitable tender. In the end, it was decided that 300lpi labels would be printed, and the results were excellent.

“We can confidently say that KODAK FLEXCEL NX System is well worth the investment—for us, the benefits of using it were obvious from the beginning,” concludes Vasilyev.

Sergei Tomilovsky, Kodak Packaging Manager for Russia comments, “When you invest in new equipment, you want it to do more than just make your production line run faster and smoother—you want to know it is going to have a positive impact on your bottom line. This is exactly what the FLEXCEL NX System has done at Print Graphica—it has enabled the company to win new business and generate additional revenue. The company is also working towards participating in the Certification Programme for KODAK FLEXCEL NX Plates users.”