THE NORTH AMERICAN LABEL MARKET. A NEW STUDY FROM AWA

Much has changed in the North American label market since AWA Alexander Watson Associates published their last profile in 2011 – so it is timely that this specialist publishing and market research company has newly provided an update.

As market demand recovers following the global economic crisis, North American Label Market Study 2013 records worldwide 2012 growth of 3.8% over 2011 levels, with North America growing by 2.1%, across a number of different labeling formats. Overall, North America now represents just 21% of world label demand – a reflection of the continuing dynamism of the Asia Pacific region, which now commands a 36% share of the global label market.

The study goes on to show that, while once again pressure-sensitive labeling leads in North America, with 49% of demand, it was sleeve labels that grew fastest in 2012[A1] . Indeed, in the medium term, the North American Label Market Study 2013 predicts, it will be sleeving – shrink and stretch – and in-mold labeling that demonstrate the highest growth rates in labeling take-up. Glue-applied labels, currently with a 32% market share, will see the lowest growth. The majority of labeling activity in the region is in prime label applications. 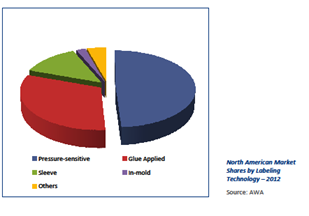 Says Jackie Marolda, Vice President and Senior Consultant, AWA Alexander Watson Associates: ‘Our study provides a strong understanding of the supply end of the value chain, which makes it invaluable for labelstock producers, material suppliers, and other companies who need to get an understanding of the industry.’

The AWA Alexander Watson Associates North American Label Market Study 2013 is available now to order via the AWA website, www.awa-bv.com, where a detailed prospectus on the study’s content is also available, and information on the company’s current portfolio of published market reports and events can also be accessed.