Geostick takes productivity to the next level with Esko 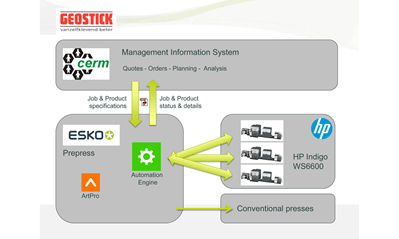 Dutch label specialist Geostick has always been at the forefront of digital printing revolution in the label industry. To entirely exploit the flexibility and productivity of its label presses – including three digital HP Indigo presses, Geostick turned to Esko and CERM to implement a highly automated and integrated workflow for its prepress and administration. “With the automation now in place, we can do more work in less time. And we continue to improve our performance every day,” states Cees Schouten, Geostick Technical Director.

“Switching to a new MIS-system is not an easy process, as it is the heart of your entire operation,” adds Schouten. “We are using Esko´s prepress system to feed our digital and flexo presses. By adding Esko´s Automation Engine on top and connecting it to the CERM MIS platform, we were able to bring our productivity and responsiveness to a new level.”

Automation and integration at work

While implementing CERM's MIS solution in its sales and order department, the company's prepress department started using Esko’s Automation Engine at the same time. Schouten explains: “To start, we had to enter all available information on clients, orders and products into our systems. This took extra time and work, but as soon as the first repeat orders came in, we immediately benefited from those efforts. Our new configuration meant that these repeat jobs went directly to press – without human prepress-intervention, saving time and money for both us and our customers.”

Schouten gives a great example how they benefited of the automation achieved by integrating the CERM and Esko systems: “Some months ago, we got in a new, large account for who we had to put about 350 new items into our system, ready for production. With the old process, each item would have taken us at least 20 minutes in prepress. But now, the job information and PDF file are automatically extracted from CERM, automatically preflighted and proofed and sent to the digital press without any manual handling. We could never have done the job this fast and this accurately without the new integrated system in place.”

After working with Esko and CERM integrated automation for more than a year, Schouten clearly highlights the main benefits: “Jobs get to the prepress department more quickly, where they are handled automatically. With less human intervention required, there are fewer mistakes. We now work very standardized, which gives us an up-to-the-minute overview of our workload and allows us to better schedule and combine jobs.”

The increase in productivity has been impressive, adds Schouten, “Before, most of our prepress team members spent 20 to 30 hours extra per month to get all the work done. By the end of last year, we managed to eliminate overtime and one of our prepress employees has taken a different position within the company, since we can handle the prepress workload with fewer people and still have capacity to take in more work.” 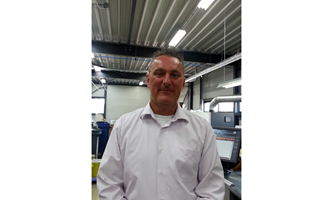 Schouten is also very positive about the Esko support he received. Implementing an integration to Esko Automation Engine includes having an Esko Solution Architect on site for five days - a specialized system integrator who analyses the existing situation, configures the new automated workflow and trains staff. Schouten says: “After some time of putting the system to work, we invited him back to help us further optimize it. And even though we can do small changes ourselves, it was extremely valuable spending another few days together improving the system even further.”

Ready for the future

Earlier this year, Geostick replaced its existing three HP Indigo WS6000 digital presses with three new HP Indigo WS6600 presses, enabling the company to produce its labels even faster and more efficiently. Schouten explains: “Having our integrated workflow in place also makes it easier to make investment decisions like that. As Esko and HP already have a longstanding partnership in providing Digital Front-End solutions that significantly improve workflow efficiency, we are now assured we can handle the further increase in speed and productivity that our new HP Indigo presses have to offer, in an accurate and automated way.”