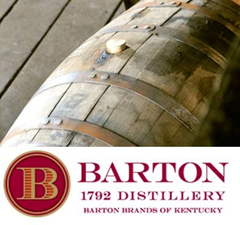 Eleven years after its founding in 1933, Barton Brands acquired the Tom Moore distillery to become a significant source of Whiskey. In 2009, it joined the Sazerac group of New Orleans.

Among the best-known brands produced and marketed by them, there is the 1792 Ridgemont Reserve, Kentucky Tavern and Very Old Barton bourbons; Fleischmann's, Skol and Wave vodkas; there is also 99 Schnapps, Rhum Calypso and Barton, the Capitan El Toro tequilas and Montezuma tequilas and the Mr. Boston and Fleischmann's gins. The company also owns several other liquors brands that are placed at the lower end of the market.

In 1997, Barton Brands started a fruitful collaboration with P.E. USA, the U.S. subsidiary of P.E. LABELLERS, with the purchase of the first rotary cold glue high speed labelling machine.