September 19, 2013
Founded in 1934 in Bardstown, Kentucky, the family-owned Heaven Hill Distilleries company is now the largest independent producer of bourbon and spirits in the country, second worldwide, for the ageing of whiskey and bourbon with a reserve of 675,000 barrels.
Among the brands produced and sold by this world-strong reality, there are: The Christian Brothers Brandies, Evan Williams and Elijah, Craigh Kentucky Straight Bourbon Whiskies, Burnett's Gin & Vodkas, Hipnotiq Liqueur, Pama Pomegranate Liqueur, Lunazul and Two Fingers Tequilas, and Dubonnet aperitifs. 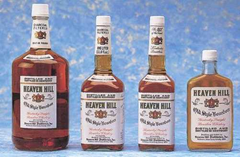 In 2011 it won two major titles: "Distillery Of The Year" and "Best Buy Whiskey Of The Year" for the prestigious Evan Williams black label bourbon.
Loyal P.E. LABELLERS since 1993, this company has bought ten rotary labelers for their production lines, the last two installed in 2012, one all pressure sensitive and the other modular with cold mixed glue and pressure sensitive technology, respectively for 350 and 370 bpm.
Much of the credit for this ongoing collaboration is due thanks to the services provided by PE USA, especially with regard to the supply of spare parts and technical assistance overseas, with local technicians.