Xeikon, an innovator in digital color printing technology, announced today that ABC-Impex, a Romania-based printing company, has purchased and installed a Xeikon 3050 digital color press to increase the flexibility and versatility of its folding carton production workflow.

ABC-Impex is located in Odorheiu Secuiesc, in central Romania. Founded in 1991, the company initially supplied document printing services and went on to specialize in packaging. Today, ABC-Impex employs more than 130 staff. With approximately two thirds of its turnover being generated by customers from the pharmaceutical industry, the company also serves a diverse range of other industries, such as food, beverages and healthcare. Customers include local branches of international pharmaceutical companies, such as Novartis’ Sandoz, Gedeon Richter, GlaxoSmithKline, Daiichi Sankyo, Sanofi-Aventis and Alvogen.

The company has continually invested in equipment and has kept abreast of technological developments. Over the years it has earned a reputation for high-quality print work, which until recently was produced on traditional offset and flexo presses. The current folding carton workflow consists of pre-press, die-making, printing on offset presses with inline water-based coating units, die-cutting, added-value embellishments – such as hot foil stamping, UV offline coating and window patching – and gluing, the equipment for which is fitted with an inline Braille embossing unit. This workflow has now been enhanced with a Xeikon 3050 digital color press. The Xeikon 3050 handles an impressive range of print media weights up to 350 gsm (16pt) or 550 µm thickness and offers maximum format flexibility with imaging widths up to 508 mm (20”), easily accommodating the standard B2 format.

“The packaging industry is rapidly moving towards a broader variety of SKUs and shorter run lengths. It’s a trend that cannot be ignored”, said Domokos Szekeres, General Manager of ABC-Impex. “This is why we decided to move into digital folding carton printing, to be able to offer our customers the flexibility and versatility they require. The Xeikon 3050 just fits the bill. The Durable Clear Toner in particular makes all the difference because it lets us make the most of our short to medium runs, in an efficient and cost-effective way.” 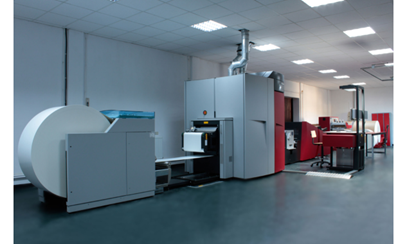 Whereas in a conventional process, a separate plate would have to be produced to apply the varnish or spot varnish, Durable Clear Toner is applied in the fifth color station of the Xeikon press. It is printed just like any of the process colors, which is why it can be applied in any shape or size without extra effort, in perfect register with the other colors. Durable Clear Toner therefore greatly simplifies the folding carton production workflow, ensuring short to medium runs remain cost-effective.

ABC-Impex is not the first converter to have discovered the potential of a digital workflow. Several of Xeikon’s customers have managed to turn digital folding cartons into a success. In Chile, Faret – a label converter specializing in folding carton packaging –, also chose a Xeikon 3050 when it decided to move into digital folding carton production. For a European customer, specializing in just-in-time production and delivery of packaging for a broad variety of ready-made meals in varying quantities, digital printing was the logical choice to avoid overstock. Cost-effective conversion of short runs opens up opportunities even to small companies to help them stand out from their competitors through bespoke packaging at affordable prices. In Switzerland, for example, a Xeikon customer produces custom-designed cake and patisserie boxes for local bakeries, a highly successful venture that enables each of the bakeries to communicate more effectively with its customers.

Printers and converters who want to find out how a digital workflow could also change their business, should visit Labelexpo Europe 2013 (September 24-27). In the Package Printing Workshop in Hall 12, Xeikon will be demonstrating an end-to-end folding carton production solution built around a Xeikon 3500. The press will be running the new Alpine 516 fuser, printing four colors and Durable Clear Toner to apply a digital spot varnish. The toner will be cured in an inline curing unit and the prints cut to sheets. The Xeikon 3500 will be integrated with an inline Bograma BSR 550, a full-rotary die-cutting, creasing and stripping unit. The printed cartons will be delivered to a shingle conveyor belt. This combination will show an extremely compact roll-to-carton configuration that enables a single operator to produce cartons ready to be folded and glued in one go, which is ideal for cost-effective short runs.

Visitors to Labelexpo will also receive an example of a finished product: A folding carton produced by Xeikon’s digital workflow will be inserted in the Labelexpo show guide as a bookmark, attached to a ribbon fixed to the spine of the guide.