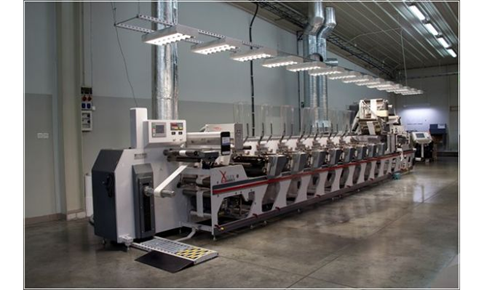 The Lublin-based Embe Press printing house has recently become the first Polish user of the Omet X-Flex X4 370 narrow-web printing press, equipped with flexo units and die-cutting station. It was the third Omet press purchased by the company as well as the second one delivered and installed by Ferag Polska – a sole distributor of Omet in Poland.

Embe Press Sp. j. was established by its current co-owners – Slawomir Bezdek and Marian Mamczarz – more than twenty years ago. From the beginning it has been using two printing techniques – offset and flexo, however the second one brings Embe Press approx. 95% of its turnover. The equipment park of the company consists of five printing presses, including three Omet machines. The latest investment in the same producer’s solution was caused – as both co-owners say – by a growing number of orders for packaging printing, mainly from the food industry. The companies representing this market area, both from Poland and from abroad, constitute the majority of customers co-operating with Embe Press printing house.

The press, delivered to Lublin in July, is a slightly smaller model than two other Omet presses previously installed at Embe Press. X-Flex X4 370 is a new solution, devoted for printing and converting flexible media (incl. BOPP uncoated foil as well as shrink foils such as PET, PVC and OPS) up to 12 microns thick, standard self-adhesive papers and low-weight cardboards. All these substrates are commonly used by Embe Press in its day-by-day production, and the new press – right after its setting up – has started printing current orders.

X-Flex X4 370, printing on webs up to 370 mm wide with maximum speed of 190 m per minute, is equipped with several innovative solutions automating production processes, incl. a precise web tension control system. Its construction allows for simple, short web run, it incorporates ergonomic printing station, standard initial registering system in printing/printing and printing/creasing modes, as well as register control system. X-Flex X4 series offers dual servo drive on every printing unit and AVS Vision 1 – automatic, intelligent matching system for longitudinal and cross registers. The press makes possible converting different orders without any changes in its basic configuration. It is compatible with both water-based and UV inks and offers three different drying systems: hot air, UV or combinations of both of them. As co-owners of Embe Press say, the newly installed Omet press was configured according to their expectations and suited for the specific production of the company.