Returning from Brussels to their Head Office in the UK, Edale have once again hailed the 2013 edition of Label Expo Europe a huge success, with a large amount of serious enquiries and a number of high specification machine sales secured during the September show.

The show saw Edale run the ‘Five Hour Production Challenge’ where the next generation FL-3 label and flexible packaging press ran continuous production from 11am – 5pm daily with a variety of short, medium and long run jobs across a range of substrates from 12 micron – 450 micron, as well as a number of additional processes including metallic inks and foiling. There were eight jobs run each day showing off the versatility of the press, highlighting the FL-3’s focus on high productivity, low waste and super fast set up and changeover times. 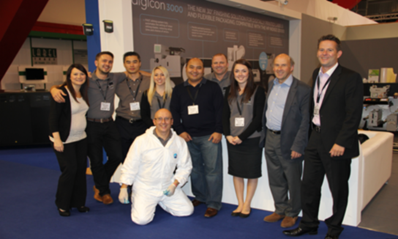 “Having the machine running continuously was a great selling point, rather than having set demonstrations throughout the day. We really wanted to challenge ourselves and put the machine to the test creating a realistic scenario for potential customers to witness how versatile the machine really is” remarks Darron Shimmons, Print and Technical Manager. “The press running at capacity enabled visitors to always see something new at whatever time they came by. The show was well attended by guests worldwide – and best of all, a lot of the visitors to our stand were new contacts to Edale” continues Jessica Gong, Marketing Manager.

A day prior to the show saw Edale’s worldwide agents hosted at a nearby facility for an afternoon of agent training where they were given information on the updates, advancements and modifications of existing Edale machines as well as the range of new machines which were also showing on partners stands; namely the FFEI Graphium inkjet press (which Edale provide the web transportation system) and Edale and AB Graphic’s joint venture with the Digicon 3000, a 762mm wide finishing line compatible with the HP Indigo 20000 digital press.

“With a worldwide network of agents alongside an impressive, and growing, product portfolio I am very optimistic that our Export, as well as our UK sales, will carry on the upward trend as they have continued to do in recent years” concludes Bernhard Grob, Export Sales Director.