Spaipa , the third largest bottler of Coca -Cola in the Brazilian territory , was recently acquired by Coca -Cola FEMSA Mexico , the largest manufacturer of soft drinks throughout Latin America. On the market since 1946 , it has four factories with a total of fourteen bottling lines for different types of drinks such as Coca Cola , Fanta , Sprite , fruit juices , sports drinks ( Powerade ) , mineral water and beer . The Spaipa plants are located in Curitiba where three bottling lines are installed, Mariingá with four production lines, five lines are installed in the Marilia factory and  two other in Bauru factory . Spaipa is a company that  in 2010 produced more than 213 million cases of 12 bottles each, for a total of two billion 556 million ( 2.556 billion ) bottles. 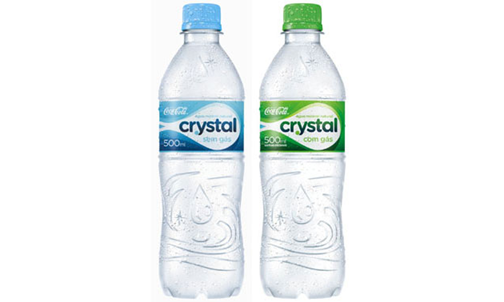 In 2012 , Coca -Cola  launched Crystal Eco, the new water bottle with 20 % less PET. To comply with the environmental requirements of the container, it turned to PE LABELLERS for labelling the new container , that it was able to achieve with the revolutionary Adhesleeve technology  ;

70 % savings on power consumption of the labeller , as hot glue is no longer used ;
100 % recyclable bottle and label,  as  pre - fixed glue on the back of the label  is based on acrylic polymers;

Elimination of chemical solvents to clean the labeling machine (since hot glue is not used ) , ensuring a safe workplace for the employees' health.

75% reduction in the length of the air conveyor belts between the blow molding machine and the filler: the decrease is from 250m to 55m leading to energy savings (less blowers)

Reducing the thickness of the film of the label about 35μ to 25μ , corresponding to a 30% reduction .

For the  ECO Crystal line of mineral water, PE LABELLERS has recently provided a linerless labeling machine  Adhesleeve N 810/18T for applying wrap-around labels on cylindrical bottles of 500 ml and 1500 ml , with a  pressurizing system for empty bottles , with a speed of 36,000 bottles per hour , installed under the fan .

Another feature of this system is the application of the label on the empty bottles with input / output containers with air conveyors , entering the machine is made directly with  universal stars with a neck gripping system (neck-handling): it is not necessary to adjust the height of the air conveyor belts for different sizes (P.E. Patent).