— Kodak’s SONORA Process Free Plate technology could lead to impressive water savings for the commercial printing industry. The forecast is based on new adoption data for the process-free plates, which remove the need for a plate processor in the prepress stage of a print operation. KODAK SONORA Plates eliminate the need for water to process plates before they are put on the press, setting a new standard for responsibility in prepress in terms of water conservation. Based on sales projections, Kodak estimates that in the next year, use of SONORA Plates could be directly responsible for saving up to 265 million liters of water. 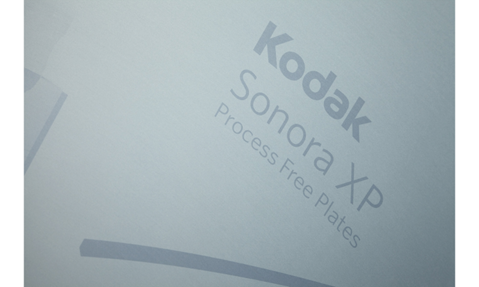 Despite estimates that only one percent of the world’s water is suitable for drinking, industry and agriculture, water scarcity has long been considered a problem relegated only to specific locales where climate or geography limit access to clean water. However, it’s now predicted that even water-rich nations such as the United States could see a water scarcity crisis in 30 percent of its cities in the next four years, and Brazil, the world’s most water-rich nation, faces water supply deficits of more than 80 percent. Both an increase in demand from growing populations and a lagging water treatment infrastructure in emerging economies contribute to the spread of this global issue beyond traditionally water-starved nations. Water conservation has become a priority that every industry needs to address.

“In the print industry, it is our responsibility to save resources where we can and continually consider where we can use technology to best minimize the drain on those resources,” said Rich Rindo, general manager of Kodak’s worldwide graphics marketing organization. “Allowing printers to take water use out of the process entirely introduces a new era of sustainability in platemaking. Apart from the chemistry and energy removed from the prepress process, the water savings alone is enough to make printers think twice about the impact they’re having on the environment with their operations.”

With traditional processed plates, water is used to run the plate processor and clean it after production, as well as to run a rinse/gum unit if baking plates. In addition, water is mixed with concentrated processing chemistry. With SONORA Plates, this water can be removed from the platemaking process entirely, conserving a natural resource and reducing the load on water treatment facilities. SONORA Plates also hold promise for print operations in emerging industrial centers with limited or no water treatment infrastructure. Kodak is seeing rapid growth in SONORA Plate adoption, with more than 400 new and converted customers.

While water is essential to commercial printing industry operations, Kodak is also mindful of its own water use. Kodak manufacturing facilities around the world closely monitor water consumption and have achieved a nearly 25 percent reduction in usage since 2009. Kodak has been committed to developing sustainable technology and practices to keep up with an ever-changing world. With products such as SONORA Plates, Kodak is delivering on its promise to drive innovations that lead the industry. Visit www.kodak.com/go/sonora.