Ellegi Trento, based in Lavis in the province of Trento, and Italgrafica Sistem, based in Castelgomberto in the province of Vicenza, both belong to the Konig Print Group, which also includes: Konig Print Solutions, an importer and distributor of overprinting systems and labelling applications; NPS, the Group's commercial agency operating in Switzerland; and Studio Grafico Canteri, the Group’s preferred partner for the production of all kinds of labels. 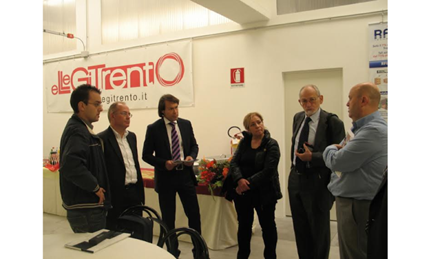 Production of labels for the food and drinks industry is the core business of Ellegi Trento, which was acquired and successfully relaunched by Konig Print three years ago, and Italgrafica Sistemi. To achieve top quality and at the same time use environmentally sustainable technologies, these firms have chosen to install two KODAK Platestetters that use either KODAK SONORA XP Plates or KODAK DITR Film, both process-free products.

Italgrafica Sistemi has been operating a KODAK FLEXCEL NX System for three years, to support its flexo printing systems, while Ellegi Trento has been using the KODAKTRENDSETTER Q400 Platesetter since September. According to Francesco Niorettini, General Manager of the Konig Print Group, “Thanks to the KODAK FLEXCEL NX System, we have achieved a remarkable level of quality, much to the satisfaction of our customers. We chose this system because in our opinion, after due consideration, we realised that it was exactly the solution we needed to produce the quality we wanted.”

Just a few months ago, the second KODAK CTP was installed at Ellegi Trento, which specialises in offset UV. “Initially, we had decided to install the KODAK TRENDSETTER Q400 Platesetter with Autoloader fitted with KODAK SQUARESPOT Imaging Technology so that the two companies would have the same equipment and would be able to communicate properly. At that time, we had not considered the SONORA XP Process Free Plates because we believed that they were not right for the UV offset we use. However, after running some tests, we found that the results were excellent with UV inks too. Using KODAK SONORA XP Plates has enabled us to eliminate the most harmful part of the process, i.e. the developer and chemicals, and we are delighted to have made this decision because it is perfectly in line with our company philosophy of environmental friendliness and using ecological processes wherever possible,” explains Mr. Niorettini.

The KODAK TRENDSETTER Q400 Platesetter can be used for exposure with both SONORA XP Plates and DITR Film.

The company also chose KODAK PRINERGY POWERPACK Workflow System to improve the connectivity and productivity across its entire prepress workflow through automation, improving print quality in their finished goods and shortening job cycle time, with full visibility from job creation to production.

Quality is essential for Ellegi Trento because many of the labels it prints are used for wine bottles. “We have achieved an important objective,” states Mr. Niorettini. “Thanks to our KODAK Systems, we can guarantee superlative quality for all the adhesive substrates we print on: natural papers, polypropylene and polyester, of course. Naturally, we also offer special processing, silk screening, laminations, hot printing and plastic coating.”

The Group is growing and continues to invest in order to expand its services, introducing technology that has enabled its sister companies to stand head and shoulders above the crowd.

An open house at Ellegi Trento on 24-25 October was held to emphasise the capabilities that set it apart from the competition. “We wanted to show the quality we can supply, our flexibility, our service, our precise quality control, appropriate for all types of product, and our commitment to the environment. This is a path we have taken knowing we have made the right choice,” concludes Mr. Niorettini.

“Delivering consistent high quality results while minimising the environmental footprint of an operation is a business winning goal that more and more of our customers are looking to achieve,” states Olivier Claude, General Manager for Print & Vice President Commercial Business EAMER, Kodak. “Pleased with the results seen by Italgrafica Sistem, Ellegi Trento is now enjoying the impact of these solutions knowing there are sustainable gains being made too.”