The essence of the culture and history of Italian tradition, a century-old company that has made its products known for their originality and taste: the Farchioni group is one of the most important clients for P.E. LABELLERS in Italy.

Since 2006, Farchioni has bought five rotary labellers which label the full range of its oil products (under the Farchioni brand) and its wine products, known in the market under the brand Terre de la Custodia, launched in 2007 to sell wine produced with the company's own grapes (about 120 hectares of vineyards), including Rosso di Montefalco Sagrantino and various Umbrian IGT labels. But there is more: the latest rotary labeller supplied by P.E. LABELLERS, installed in 2011, was designed for the first line in the beer market. That year the Farchioni group debuted in the market with the brand Mastri Birrai Umbri, with the production of innovative craft beers, featuring special malts, wheat and legumes, all carefully cultivated in Umbria by the group itself. Another special feature of the beers they produce is their "raw" quality, unpasteurised and unfiltered, but with equally high drinkability. 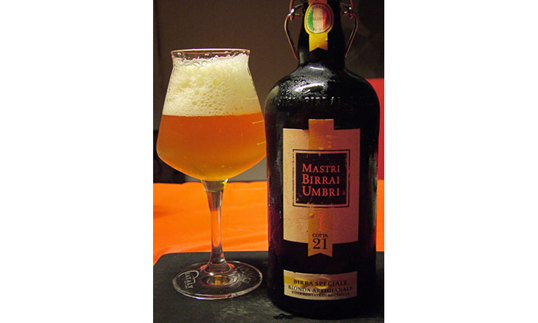 At the end of 2013, Farchioni ordered the sixth rotary labeller from P.E. LABELLERS; a labelling machine that combines two production sectors: oil and beer. It is in fact a modular labeller (MODULAR TOP model) with five labelling stations for the application of a front label with glue and adhesive and a back label with glue and adhesive, plus a fifth self-adhesive station on a trolley for the application of a "U" seal. The labelling machine allows for the orientation of bottles thanks to a system of electronic centring with optical fibres associated with integrated drive servomotors to rotate the plates. A photocell system has the task of identifying the possible absence of labels during the inspection of the finished product. A single labeller which is thus able to label both the 1 litre bottles from the extra virgin olive oil line and the Il Casolare brand, as well as the 75 cl bottles from the beer line and the Mastri Birrai Umbri brand; the latter designed, selected and created by the Farchioni family itself. A labeller which works at 360° for a company that is focused on a diversification plan oriented towards domestic and international markets.

But oil, beer and wine are not the only sectors supplied by them. On the same wavelength as wine production, we also find the mill which supplies the flour market dedicated to breadmaking and the production of pizza dough.

From P.E. LABELLERS a sincere and heartfelt thanks for the confidence in our labelling systems, and a wish for the growth of your products in the market with the hope of continuing to have you as one of our clients in the most diverse production sectors.