“The highest possible standard in platemaking” – that is the Flex-Punkt philosophy. It is a claim that goes hand in hand with very high quality demands. And when it comes to photopolymer flexographic printing plates, it is a challenge the company is rising to with its KODAK FLEXCEL NX Wide System.

“Nowadays, we are so flexible in our operations that we can simply ask our customers what they want. Because we can do anything,” explains Günther Weber. “Anything” is the way the Managing Director and sole partner of Flex-Punkt Druckformen GmbH describes the wide range of flexographic printing plates the company produces. This business, which is active in the prepress sector, uses direct laser engraving technology to manufacture elastomer endless sleeves and plates as well as photopolymer sleeves and plates in-house, and can supply the latter products mounted on either sleeves or cylinders. Since it was founded in 1994, the company’s main role has been that of service provider to packaging printers, both locally and from further afield, with which it has built up close partnerships. The company also produces In-the-Round sleeves for a series of partner companies. The plates supplied by Flex-Punkt are used primarily for printing flexible packaging on foil and paper substrates for a vast range of food and non-food products, as well as for paper napkins (on tissue).

The company’s relocation to its newly built headquarters in the town of Melle in Lower Saxony (Germany) in early 2014 created the necessary preconditions for well-organized, rigorous workflows. The available surface area was more than doubled compared with the previous premises in Steinhagen. Office space and conference rooms covering approximately 8,611 square feet (800 square meters) coupled with a production hall offering a working area of 13,454 square feet (1,250 square meters), including extensive sleeve storage space, cover current needs while still leaving scope for future expansion. The company, which employs 28 staff, runs its platemaking operations in two shifts while digital repro and data preparation activities are conducted in a single shift.

Innovative technology at the new site

In addition to its new business premises, Flex-Punkt has invested significantly in digital platemaking equipment in recent years. Alongside two systems for direct laser engraving of elastomer sleeves and plates and a laser imager for round photopolymer plates, the company has been working with a KODAK FLEXCEL NX Wide System since August 2013. “There were two main reasons for investing in the Kodak system. On the one hand, more and more of our customers were asking for printing plates that would permit high-resolution flexographic printing or give them an easy point of entry into the world of higher screen rulings. On the other hand, at the level of our photopolymer operations, we needed a replacement for our ageing LAMS laser system that dated back to the year 2000,” Weber continues. “We chose the Kodak solution because the system as a whole is user-friendly and easy to get to grips with. The KODAK FLEXCEL NX Wide Imager is fast and the KODAK FLEXCEL NX Plate material is very good -it dries exceptionally quickly after washing. That helps us respond to urgent cases when customers need their flexo printing plates without delay. What is more, it means we have a solution in-house whose flat-top dot technology is setting new quality standards in the market.” 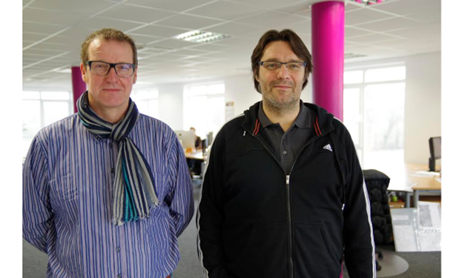 The KODAK FLEXCEL NX System’s flat-top dot technology ensures that tonal values are transferred to the printing plates dot-for-dot with no loss of fidelity. This results in the creation of solid, full-amplitude screen dots with flat, sharp tops across the entire tonal range on the KODAK FLEXCEL NX Plates. This is possible thanks to the high-resolution and extremely precise KODAK SQUARESPOT Imaging Technology implemented in the KODAK FLEXCEL NX Wide Imager, as well as the UV exposure of the KODAK FLEXCEL NX plates during a downstream process in which atmospheric oxygen is eliminated from the plate surface.

Simple integration in the production process

It was an easy task to integrate the KODAK FLEXCEL NX Wide System in the company’s production environment. Flex-Punkt has subdivided its digital prepress operations into a design/repro area, in which employees concentrate on creating and processing one-ups as well as on proofing operations, and a so-called layout area. The job of the staff who perform this layout work is to check the results of the processed one-ups prior to platemaking, undertake any final corrections that may be necessary, and then combine different multiple-ups or color separations to form complete plate layouts. A Nexus RIP is then used to rip these plates as 1-bit TIFF files which are then routed on to the various laser systems. In the case of the KODAK FLEXCEL NX Wide System, the Kodak TIFF Front End Software at the imager workstation takes over the data for output. “The Kodak technology was integrated in our workflow without the slightest hitch. All we had to do was connect the KODAK FLEXCEL NX Wide System to our network and create new output hot folders and we were ready to start production,” says Flex-Punkt’s Managing Director.

One air-conditioned section of the new, generously proportioned production hall houses all of the imaging and direct laser engraving systems. They have been arranged here in a way that ensures that all paths between the individual processing stations are kept as short as possible. The KODAK FLEXCEL NX Wide System Imager and KODAK FLEXCEL NX Wide Laminator are installed next to one another. Following high-speed imaging (maximum format 43" x 61"/1,097 x 1,554 mm in barely ten minutes), the Thermal Imaging Layer (TIL) is laminated to the KODAK FLEXCEL NX Plate in a mechanical process performed in the laminator. This operation is followed by the usual UV exposure steps in a flatbed UV exposure unit. For the downstream processing of the photopolymer plates, Flex-Punkt has installed an automatic Evo line machine from Vianord Engineering with a flat washer and drying unit. 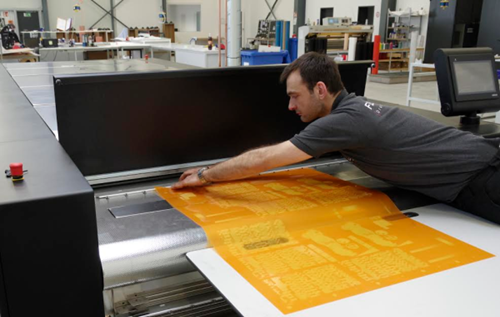 Flex-Punkt meanwhile supplies KODAK FLEXCEL NX Plates to a whole range of printing works. Volker Ruge, the company’s Operations Manager, explains: “One advantage in the current environment is that the market is now familiar with this plate. Using KODAK FLEXCEL NX Plates, printers can achieve better results and move up to the next screen resolution without needing to make any major changes to their parameters. If they previously worked with a 106 lpi screen, then the KODAK FLEXCEL NX Plates allow them to switch to a 122 lpi or 132 lpi screen without any great difficulty. Provided everything is optimized, it is possible to achieve outstanding results with even finer screens using this plate. In this case, the printer has to modify certain things such as the anilox rollers, and we too have to make certain job and substrate-specific adaptations to the data during our prepress work.”

“Another important aspect is that, thanks to DIGICAP NX Screening, the Kodak plate delivers a larger volume of ink to the substrate,” Weber stresses. “The increased density of the solids makes the printed image more striking than ever and is greatly appreciated by flexo printers. What is more, the print quality of screen tints is extremely good.” The KODAK DIGICAP NX Screening process used during imaging ensures that all the elements for printing on the flexographic plate have a uniform, fine structure that effectively enlarges the surface. This results in improved ink transfer from the plate to the printing stock.

“Flexible packaging represents an important market for us. We have also already used KODAK FLEXCEL NX Plates for extremely absorbent tissue papers, as well as for printing on coated and uncoated papers. We can cover all of these applications – and our experience has invariably been very positive. The printers tell us that they can produce consistent quality throughout their print runs,” Günther Weber concludes.