The HERMA Group continued its unbroken expansion in the 2013 fiscal year, again achieving growth in sales in its business with self-adhesive materials, labels and labelling machines: the total revenues of 261.2 million euros represent a year-on-year increase of 6.4 % (from 245.6 million euros). “Having recorded the highest annual sales in company history to date in 2012, sustaining this success in 2013 was particularly challenging against the background of the weak economic recovery. We pulled it off and, with sales setting another record, we have again shown stronger growth than the market as a whole,” commented managing directors Sven Schneller and Dr. Thomas Baumgärtner. In doing so, the self-adhesive specialist benefited from the comparatively acceptable economic conditions on the domestic market this time around. Whereas Germany's gross domestic product edged up slightly, by 0.4 %, 2013 as a whole was a year of slowdown in the eurozone and many other foreign markets important for HERMA. Nevertheless, the company based near Stuttgart, Germany, posted an upturn in exports of 5.9 % to 143.7 million euros. The domestic market grew by 6.9 %, to 117.5 million euros. Accordingly, the export ratio was 55.0 %, after 55.2 % in the previous year. 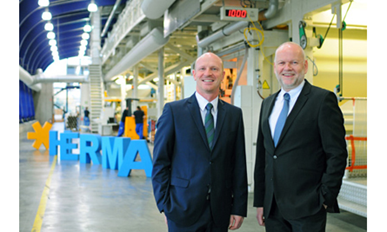 “Having recorded the highest annual sales in company history to date in 2012, sustaining this success in 2013 was particularly challenging against the background of the weak economic recovery."

“The 2013 pattern of business more than hit the mark in terms of our forecast, with results that were even slightly better than our target,” stated the HERMA managing directors. “Our task now is once more to create the preconditions for renewed growth. We will continue to focus on enhanced efficiency in production and innovative strength in product development.” Given the brighter outlook on the domestic and foreign markets, Mr. Schneller and Dr. Baumgärtner anticipate a 3 % rise in sales across the company in the current fiscal year.

In absolute figures the Self-adhesive Materials division contributed around half of the company's growth in 2013. Revenues climbed by 5.7 %, from 140.0 million euros to 147.9 million euros at year-end, although the division had to contend with currency-related contracting margins in the key British market in particular. In volume terms, the increase in sales of self-adhesive materials was around 11 %. This was based on the systematic expansion of HERMA's multi-layer technology, coupled with the continued introduction of new, innovative adhesives.

In percentage terms, the pattern of sales recorded by the Labels division was comparatively pleasing. Growth of 5.2 % boosted revenues from 74.5 million euros to 78.4 million euros. However, business in the office and consumer sector was still affected by an absence of market growth as a consequence of intensified digitisation of office jobs and falling numbers of children attending school. Parallel to this, classic wholesaling and retailing ceded market shares to online suppliers and large chains. In the industrial labels sector, further gains were made in business with large international customers and in the core unprinted labels segment.

In 2013 the biggest growth in percentage terms was generated by the Labelling Machines division. Sales rose by 12.2 % year on year, from 31.1 million euros to 34.9 million euros. “The growth strategy outlined in the previous year has been successfully put into operation,” said the managing directors. Alongside ongoing product portfolio expansion, this includes stringent standardisation of the existing product range, as well as a strictly customer- and application-based approach to developing industry-specific solutions. The division also benefited from building up its international sales activities.