Organisers of the ‘Safe with Sound’ live anilox cleaning trial hailed it ‘conclusive’ and ‘a resounding success’ after the broadcast finished on Friday 30th May.

Streamed live to a combined audience of 607 viewers, the trial was organised for 5 full days of continuous ultrasonic cleaning utilising unique Alphasonics technology using 3 brand new anilox rolls and 3 ex production rolls. The trial was set up in response to claims that their unique ultrasonic technology lead to damage of aniloxes, despite a 21 year record relating to a ‘no roll damage guarantee’ from the company. 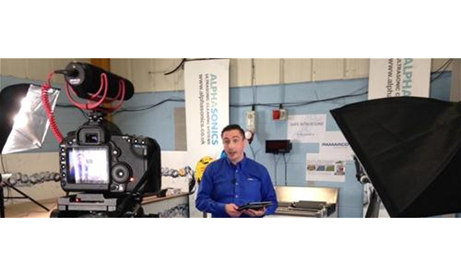 After closing the show following a live results broadcast revealing zero damage to the aniloxes , Christopher Jones, Alphasonics’ UK and Ireland Sales Manager said, “I’m delighted with how the trial has gone and the results we’ve been able to achieve. However, I’m not surprised. We’ve said all along that roll damage simply could not occur with our technology and we’ve proved that. Giving access to customers around the world through a fully transparent and open trial was just a perfect way to do it.’

For the full length of time, which came in at well over the original target of 1300 cycles, the trial was continuously captured around the clock by 4 CCTV cameras and was interspersed with comment and discussion by Christopher Jones himself in three separate live interludes.

The rolls were independently inspected by Mr. Jon Jordan of Troika Systems, using their AniCam anilox measuring system, before the trial commenced and as the trial finished. Results were taken remotely by Mr. Jordan during the show’s close with the viewer being given full access to the anilox roll measuring process . The results were revealed as they happened during a full demonstration of the AniCAm while Jones conducted a discussion Q and A session.

Mr. Jordan confirmed that zero roll damage had occurred and paid testament to the cleanliness of the aniloxes due to their cleaning in the Megan unit from the Alphasonics range. “The aniloxes used in the trial show an excellent level of cleanliness and show absolutely no signs of damage despite the extensive cleaning cycle. Troika systems verify that all rolls are undamaged and would be perfect for full production use. We endorse the non destructive cleaning technology used in Alphasonics cleaning systems.”

Alphasonics also took time to thank Inometa and Pamarco Global Graphics who also supported the trial by both supplying brand new 1200lpi aniloxes. The remaining rolls were supplied by production facilities and other anilox suppliers – one of making up the remaining 1200lpi roll, the other three being 400lpi respectively.

Jones commented, “We’ve worked extremely hard in putting this trial together and we could not have done it without the help of those who kindly took the time and effort to support us. The idea was to bring the truth to customers and just as importantly, to anilox and press suppliers in an open and honest way, leaving no wriggle room for argument or questioning of how we carried this out. We’ve set out to ‘bust some myths’ and with these conclusive results, I’m confident we’ve achieved that.”

Alphasonics will publish the roll measurements online over the coming days and will close the trial officially with a final discussion using the company’s Blog. The footage will now be shortened and posted to YouTube as a condensed version for viewers to watch at their convenience.