At its recent congress in Monaco, FINAT presented the annual 360° tour of the label industry, looking at underlying forces for the industry as a whole and for the association. Jules Lejeune, managing director of FINAT, reported on the labelstock statistics for 2013 and introduced the first findings of the new FINAT RADAR regular report and analysis of the European narrow-web market.

Features from the first FINAT RADAR

Earlier this year FINAT announced the launch of RADAR, a member-exclusive half-yearly publication that will report trends and growth rates at all levels across the European narrow web supply chain.

President Kurt Walker commented: “The FINAT RADAR gives members something they cannot find anywhere else. The publication offers FINAT membership a resource that benchmarks key metrics within each European region and market segment, in addition to providing comparisons between Europe and other major global regions. The RADAR is a comprehensive report, tying together converter, brand owner, material supplier and capital equipment trending and performance analysis." 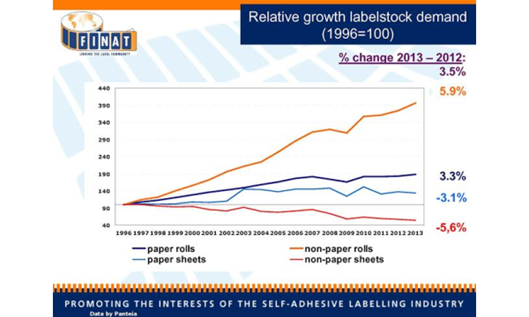 In this recently released debut edition of RADAR, more than 50 FINAT label converters participated in a detailed survey focusing on sales and profit trends, production data and capital equipment procurement trends. Converters from every European region participated in the research to enable benchmarking analysis in each market.

In the Converter Survey, participants were asked to predict revenue growth over the course of the next six months for each major end-use sector they serve (food, beverage, pharmaceuticals, consumer durables, etc.), in addition to providing their companies’ turnover growth for 2013. These data enable converter members to gauge their performance and projections against the European market as a whole, and against companies in their own specific region. 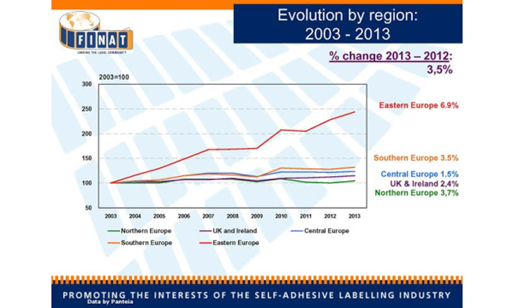 In parallel to this approach, the RADAR Brand Owner Survey asked companies to project growth and/or contraction rates for their label purchases over the next year. This exercise is essential in order to cross reference converter projected growth rates with what brand owners are predicting label procurement increases will be, in order to calculate growth rates for the market that are as close as possible to what the future will actually deliver. The table below indicates average growth rates from both converters and brand owners that were surveyed for the first edition of the report.

In addition to historical and projected growth rates, the debut edition of RADAR includes both a European Labelstock Index and a European Conventional Press Index. Both indices aggregate data from FINAT labelstock and conventional press member suppliers to show quarter-over-quarter growth and/or contraction rates in each sector. Each edition of the report will feature these indices, offering FINAT members access to a quarterly index that tracks labelstock growth and press sales.

The publication will also feature special coverage of issues pertinent to the changing dynamic of the European label converting marketplace. For the first edition of the report, brand owners were surveyed regarding their companies’ label sourcing trends and whether they were considering replacing Western European sourcing channels with other regions. Every brand owner was asked this question and the analysis of the aggregated results is a provocative one. Within the next 12 months, more than 50% of surveyed brand owners indicated that their companies were seriously considering the re-sourcing of some, or all, of the labels currently sourced from Western Europe, from other regions.

At the FINAT congress, Jules Lejeune documented labelstock demand in Europe for 1996 to 2013 showing that market volume had doubled in the last one and a half decade to just over 6 billion square meters. In 2013, overall demand grew by 3.5% over prior year - an increase that was mostly achieved in the second half of the year, with non-paper (film) labelstocks growing at 5.9% and paper stocks at 3.3%. 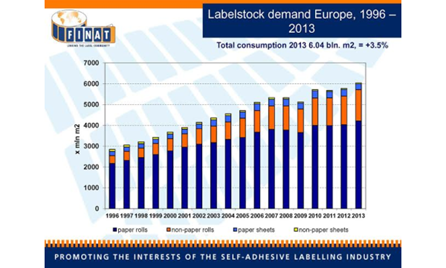 Regionally, the countries to the east of Europe evidenced the greatest growth in 2013 over 2012 at 6.9%, with all other regions showing modest growth. The outlook for 2014 is positive, based on Q1 year-on-year results, both in terms of material grades and by region.

Jules Lejeune defined the four forces that drive the label industry: the end-use market drivers, technology innovation, sustainability and corporate drivers. "Together these four forces impact the label industry as they are the subject of initiatives and activities that are today within the remit of FINAT, making the association's relevance to its membership higher than ever before," he concluded.