Since it was founded in 1977, new technologies and searching for the optimum way to deliver print have been at the heart of QRT Graphique’s development strategy. The company, which is located on a 10,000 m2 site in the suburbs of Alès, has become one of the major players in the adhesive labels market by increasing investment and developing an unsurpassed know-how that is recognised throughout France.

Every year, QRT Graphique prints tens of millions of labels for its clients – covering the agri-food, Chemical and cosmetics industries – on a dozen production lines that include flexo, typo, offset and screen. However, the print managers had closely been monitoring digital printing as a potential growth driver mainly for short runs. 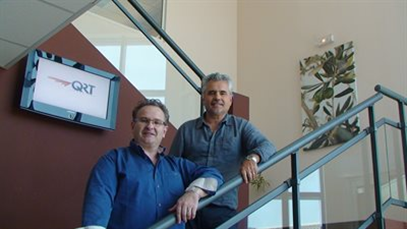 “For several years, we had been following the evolution of digital presses – in particular those from Domino – waiting for the one that would be a perfect match for our production requirements in terms of productivity,” recalls Christophe Quirantès. “At the start of 2013, we went to see the N610i in Domino’s demonstration centre in Cambridge, England. We ran printing tests on various materials. The results were conclusive, both in terms of the quality printing and the speed of execution.”

QRT Graphique also reviewed other devices, but Christophe is confident they made the right choice: “We knew we could deliver larger runs with the innovative technology developed by Domino compared to the standard digital presses offered by other manufacturers.”

A few months later, the N610i digital press with four colours + white became the first to be installed in France. Says Christophe: “The choice to include white was motivated by the need to print on transparent synthetic gold and silver substrates, whereby white is essential to give correct colour matching. This allows us to get good opacity and it brings out the colours giving the label a vibrant appearance.”

Where short runs of 50 to 10,000 labels were previously associated with digital production, this has now extended to runs of thousands of copies. “With the piezo ink jet technology, we are now looking to replace our rotary typos because the N610i is just as efficient on medium run lengths. We have already printed a run of 400,000 labels in production,” he continues.

Christophe believes that Domino’s piezo ink jet technology is the future for his sector. Furthermore, the QRT printshop can rely on the service and expert advice from Domino to ensure its digital press is always running smoothly and providing valuable input into the development of new products for its customers.

A dramatic reduction in lead times

With digital, the pre-press process is eliminated, which translates into substantially reduced production lead times. And that’s without taking into account the ease and speed of switching from one job to another; all you have to do is send the files to the press to start printing.

Christophe says: “With Domino’s N610i, the labels are already printed by the time we would have finished plating up on the typography press.” The result is that, combined with the productivity of the N610i, which runs at 50 m/min in high definition, digital printing is proving unbeatable when it comes to execution speed. And, that doesn’t include the savings made on waste that is produced during plating up in flexo.

“Since we’re running at a constant speed, it’s easier to organise our production planning and plan ahead,” emphasised Christophe, whose print shop produces around 20 million m2 adhesive labels a year.

Its first investment in digital allows QRT Graphique to position itself in new markets. For example, with medium size runs of multi-reference labels, the company can now produce the same label, but with different visuals, barcodes or Datamatrix codes. This could not previously have been achieved with flexo printing.

Christophe Quirantès unveils another strength of Domino’s N610i digital ink jet press: “We are attracting new customers, as UV inks produce a screen-printed likeness. It gives the impression of being thicker to the touch, and provides increased abrasion resistance compared to traditional printing. There are a number of sectors where these qualities are extremely important, for example with the transportation of products in boxes and ensuring that the labels are not damaged on arrival.”

The proof is in the product

QRT Graphique’s introduction of digital has even led to modification of the company’s sales policy. Now, when sales personnel visit a prospective customer, they do not spend a lot of time talking about the quality of the new press, and rather ask for a test file and return a printed copy of the label within 48 hours. “This technology is enabling us to get our message across to prospective customers, as they can have their own product in their hands extremely quickly,” adds Christophe Quirantès. “We are bringing something new to the market and differentiating ourselves, which is essential with nearly 300 labels manufacturers in France.”

After an initial expansion drive in 2011, which included acquisition of a print shop and establishment of a sales office in Paris, QRT Graphique is preparing for the next stage. The N610i’s productivity and print quality allows the company to conquer new markets across France during this expansion period, and stand its ground against the competition.