Over 50% of release liner manufacturers’ output is consumed by the pressure-sensitive label industry, so the annual AWA Label Release Liner Industry Seminar is of major relevance – especially today.

Corey Reardon, President and CEO of AWA Alexander Watson Associates, opened proceedings by asking delegates to complete and return questionnaires for a ‘real-time’ survey of the label release liner market’s current profile – the results of which were published at the end of the event.

He went on to deliver an overview of the total global release liner market, showing that the Asia Pacific region has nudged ahead of North America and Europe as the largest market overall; that film-based liner now commands a 16% share of global usage; and that global growth across all segments is running at just under 5%. ‘While labelstock remains the core,’ said Mr Reardon, ‘it is the graphic arts, tapes, medical, and industrial segments that are the major growth areas’.

Mr Reardon went on to record AWA’s data findings on the overall labeling market – including technologies that do not involve release liner -- in 2013. ‘Today’, he said, ‘a wide span of production identification technologies are in use – including wraparound, glue-applied, and even direct print.’ Taking the last item out of the equation, he showed that the Asia Pacific region once again takes the major market share, and is continuing to grow at more than 6% per annum. ‘The majority of label applications are still equally shared between the glue-applied (including patch glue and wraparound) and pressure-sensitive technologies; but it is heat shrink sleeving that continues to exhibit the highest growth’, he showed. He pinpointed major trends in the industry, which in growth terms remains closely tied to GDP. He explored the evolution of products in order to drive out cost; M&A activity across the value chain; recycling, environmental, and sustainability concerns; the flexibility of digital print, which in some aspects represents a competing technology; and the growth in usage of alternative packaging methods such as pouches.

‘In-mold labels remain a niche label format’, Mr Reardon observed, with a ±5% ongoing market share, ‘but’, he adjured delegates, ‘we really need to keep an eye on the sleeving technologies – these are real competition that are eroding the market shares and growth potential of pressure-sensitive and glue applied labels!’

The North American label market’s profile – from M&A activity and industry ‘movers and shakers’, through digital and conventional print applications, to release liner in all its aspects -- was explored by Danielle Jerschefske, North America Editor of Labels and Labeling International and PackPrint World. She presented a colourful portfolio of examples of the region’s creativity in making labels that both deliver functionality and sell products. Personalization is proving a real opportunity for label converters and brand owners alike to differentiate. Current examples include the global Coca-Cola personalized (although still mass communication) bottle campaign and ‘team wines’, labeled specifically for major league baseball teams. 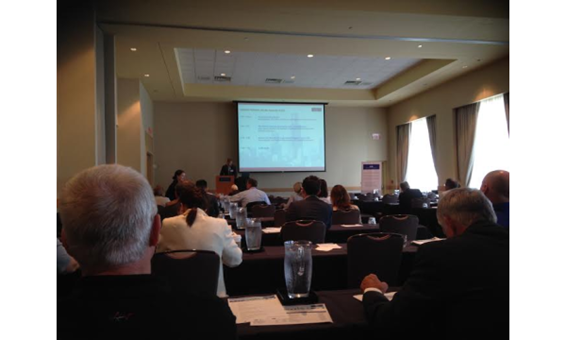 Ms Jerschefske highlighted ETI’s success in creating a labelstock lamination and print continuum, commenting that, for customers, ‘if something goes wrong on an ETI line, you only have one call to make!’ She also drew attention to the achievements of digital print, saying that ‘the speed of these machines now can compete pretty well with conventional print – and it’s now possible to even finish digitally-printed labels in line.’

There are, she said, certainly opportunities for label converters who want to expand their offering, and there are real innovations around, both in the broader world of packaging print and in pressure-sensitive labels; but, Ms Jerschefske warned, ‘linerless labels are NOT becoming more mainstream, because end users are reluctant to invest in even more new equipment.’ Release liner recycling remains a focus across the label industry in North America – but it is the brand owners who hold the trump hand in getting full-scale liner recycling moving.

Dan Muenzer, VP Marketing, Constantia Flexibles, delved deeper into the competitive product identification and decoration technologies that aim directly at pressure-sensitive labeling, providing an industry’s expert’s opinion as well on the labeling market in the near term and beyond, and the various end-use market segments. In the largest segment, food, he said that ‘the transition from box to flexible packaging is coming on strong, but it’s still a niche market for beverage.’ He pinpointed a peanut snack pack – a prizewinner in the 2014 Dupont Packaging Awards -- which combined a ‘blown box with a resealable pressure-sensitive label’.

Mr Muenzer reiterated that, among the many options which are attracting varied levels of brand owner attention, shrink sleeves are ‘definitely here to stay – but they involve a secondary process – shrinking – and 30% of their cost is in the seaming process. Roll-fed shrink does away with this process, but it is still a coming thing.’

He went on to discuss more threats and opportunities. ‘Cans are hip and cool’ said Mr Muenzer, ‘especially where the younger generation is concerned. In the US, not only beers, but also wines and spirits are going into cans now’. The resurgence of cans is just one example of change across the whole span of packaging.

‘In the returnable bottles sector, wash-off pressure-sensitive labels will definitely enjoy big growth -- as will the recycling of PET bottles, once the label adhesive problem is solved.’ High-speed digital print, and printed electronics (interactive labels, exemplified by the ‘smart’ Heineken Ignite bottle, which reacts to its surroundings, and the people around it) are examples of innovative pathways in the labeling field, but, he warned: ‘Brand owners are not going to be loyal to pressure-sensitive. Whatever technology gives the best flexibility will win.’

Cindy White, President and CEO, Channeled Resources Group, and a member of the TLMI Liner Recycling Subcommittee, part of the Environmental Committee, went on to provide an update on label release liner recycling. ‘TLMI is concerned with strategies for release liner from the beginning of life (sustainability), through its mid-life (its carbon footprint), and to its end of life (recycling and waste-to-energy’. The Recycling Subcommittee’s mission is to educate both converters and end users on available recycling programs as practical alternatives to landfill, and to support that with down-to-earth, helpful educational material. Much activity in this arena is already visible – including a straightforward, downloadable pdf – ‘How to Recycle Release Liner’ -- providing step-by-step advice and listing no less than nine providers of collection services within the USA. Currently involved in developing a pilot recycling program in the mid-west with targeted label converters and their customers, the Recycling Subcommittee’s next step is ‘to meet with sales representatives at target accounts’, ended Ms White, ‘and to keep looking for new ideas!’

In a small step change, Jackie Marolda, VP and Senior Consultant, AWA Alexander Watson Associates, updated delegates formally on the current status of ‘a pressure-sensitive, linerless label -- a regenerated technology base where new things are happening’, she began. ‘Today’s interest responds to a number of forces for change,’ she said: ‘social, legislative, and economic – particularly in terms of waste costs, and liner costs. The pressure-sensitive label converter rewinds used liner – but only about 1% is recycled.’

Now with around 5% of the label market, linerless labels, while they do not employ a liner, still require the silicone release coat. Nevertheless, industry leaders along the value chain are investing in the technology, although, echoing Ms Jerschefske, Ms Marolda added, ‘the fact that there are a number of different systems mitigates against linerless to a certain extent from the end user’s point of view. VIP/logistics labels fit linerless very well, and their printer and label dispenser systems can be easily, affordably retrofitted. The growth opportunities in VIP labels are high’. This constitutes a real threat to linered pressure-sensitive labels but, for primary label applications, linerless is not significant. ‘Where it fits, it fits well’, Ms Marolda said – but the areas where it does fit are those where the business was ‘mostly never pressure-sensitive’.

Ms Marolda’s conclusion was that, for the future, linerless labeling will grow – but, overall, it does not represent a disruptive force for the release liner industry.

‘Thin release liners are about saving time – and being green’, said Kevin Hayes, Executive Vice President, Outlook Group: a company which has been recycling its labeling and packaging solutions waste for more than five years now. He reminded delegates that the annual yield on label purchases is only 91%, because 9% do not even reach production, and therefore final product delivery. His company’s 100% recyclable PET MICROLINER® label construction, Mr Hayes explained, ‘features a thinner label liner and a reversed die-cutting process; delivers 75% less release liner waste, and more labels per roll; saves time, saves space, saves transportation costs, and the need to recycle – and it is compatible with your current label application equipment.’

Inline coating, laminating and printing – including linerless technology – were the central topics addressed by ETI Converting’s VP National Sales, Kevin Longueil. It is less than 15 years since the company’s first ‘Cohesio’ integrated production options were exhibited at Labelexpo, and since then they have proved their efficacy in ‘combining silicone, adhesive coating, printing (using any process of choice) and diecutting in one process to deliver less waste, time savings and energy efficiency, tight production control, and improved profitability.’ Indeed, Mr Longueil added, ‘For pressure-sensitive constructions, this can mean a pretty big saving for the converter!’

ETI’s linerless label option, involving a PET liner, which can be reused up to 20 times, and the company’s thin MiniLiner™ PET and paper liners offer other cost- and waste-saving options.

A new green initiative in glassine release base

The practical pathway to success

‘Why guess? Ask your release liner supplier’, adjured Doug Goldstein, Market Manager for Adhesives Research, Inc. Through case studies and expert ‘best practice’ recommendations, he underlined the importance of a real technical relationship between a release liner supplier and his supplier of adhesives and coatings substrates – although, he said, ‘typically, people don’t think this way!’

‘Shop for the best overall solution, matching overall quality, customer and technical support and price’ was his advice for all but real commodity applications. ‘Test, test, and retest over time’ on both pilot and production lines before final specification, because a typical liner qualification time is three to six months. ‘All adhesives and silicone liners have ranges’, and, once again, interaction across the value chain is essential to achieve best performance. Performance may be compromised by adhesive shipping at an inappropriate temperature; by inappropriate storage temperature and humidity; and by the consistency of the liner substrate’s surface in terms of roughness, smoothness, shrinkage, and surface energy.

It was time for Corey Reardon to review the outcome of the event’s real-time industry survey. 79% of respondents said that being a global supplier – ie with sales/operations on three or more continents -- enhances their companies’ growth opportunities and, ‘consistent with our last survey’, said Mr Reardon, ‘68% of respondents consider their businesses to be global already; 25% regional; and 7% local. Indeed, 52% of delegates say that the release liner industry is already truly globalized , with a further 22% expecting the process to be complete within just five years.’

In the last 12 months, the survey showed, costs – transportation, energy, labor, and materials -- have generally increased, but the coming twelve months are expected to show greater stability. Regionally, in 2014, respondents’ business in Asia is expected to enjoy the highest growth. Mergers and acquisitions are a continuing feature of the packaging and print market, and 74% of survey respondents expect their own companies to be affected during the next five years, as M&A activity in the sector gathers speed.

The key to the future?

The final survey question was an important one: ‘While the release liner industry has experienced incremental improvements in products and services in the past five years, but we are in real need of some true innovation’. Results clearly showed that the majority of respondents agreed.

Closing the seminar on this significant note, Corey Reardon thanked the event’s platinum sponsor, UPM, and gold sponsors Dow Corning, ETI, Evonik, Labels & Labeling, and Mondi, for their support, and welcomed delegates to cocktails at the end of a day that had identified both opportunities and issues in the world of label release liner.